This is Horror Novellas.

I have much to thank This is Horror for – the website dedicated to all things – err… horror has introduced me to many new authors whose work I’ve then gone onto investigate further and enjoy. Amongst these authors I can count Stephen Graham Jones and Paul Tremblay, novels from whom are included in my favourite reads of this year. Last year, their chapbook The Visible Filth by Nathan Ballingrud had the “honour” of being my choice as the best single story of 2015.
Much joy then, at the news of the publication by them of two new novellas, A House at the Bottom of a Lake by Josh Malerman – whose Bird Box took an audacious concept and crafted it into an amazing novel and They Don’t Come Home Anymore by TE Grau, whose book The Nameless Dark was my pick for the best collection of 2015.
Exciting!
Two very different stories but sharing a common theme – the transition from childhood to adulthood, with both novellas having as their protagonists seventeen year-olds. Teenagers are, of course, a staple of horror; films have been using them as cannon-fodder for decades now, sacrificing them to Freddys, Jasons and their ilk in order to appeal to marketing demographics. Given the calibre of the authors though, it’s fair to expect a little more than gratuitously violent death scenes from these novellas and, unsurprisingly, that’s exactly what you get. 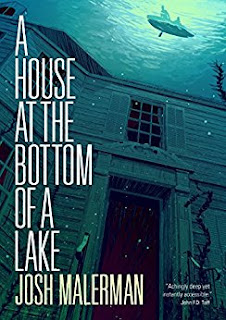 James and Amelia are the teenage protagonists of A House at the Bottom of a Lake and the story is that of their burgeoning love affair. One of their dates involves a boat-trip out onto a lake which leads to the discovery of a second, adjoining body of water and ultimately to a third lake. It is beneath this last stretch of water that they discover the house of the title as they glimpse its roof beneath the surface.
Strange that no one knows of its presence before now, strange too that the lake beneath which the house lies is a new discovery for James, already familiar with the area. So it is that the seeds are planted in the readers’ minds that this is all in the teenagers’ (or possibly only of them) imagination, that their discovery of first, true love is as significant a find as that of a house hidden in a lake. Is the house real or just a huge metaphor?
Whatever, their curiosity leads to further explorations of the building and, much like the change from air to water, so too the atmosphere of the book changes, a sinister mood replacing the joy and excitement of the beginning of the relationship.
The world inside the house is wonderfully created as is the slowly growing sense of dread – and that things are not quite as they should be… Why, for instance, have none of the house’s contents floated away? It’s when James attempts to find an answer to this that things turn very bad – leading to some extremely well crafted and effective creepiness.
Which kinds brings us back to the whole metaphor theory… Maybe love should be accepted for what it is, to question it will only destroy the whole thing..? Maybe it’s not about the house anyway – it’s perhaps significant that this is A house at the Bottom of A lake and not The House…
Deep thoughts – but then this is a story with depth in every sense of the word.
Read it as a metaphor or as a piece of magic realism, the choice really is yours. Either way you’ll find much to enjoy in this novella; some beautiful prose, spot-on characterisation and some genuinely creepy set-pieces enhanced marvellously by the claustrophobic surroundings of a submerged house. 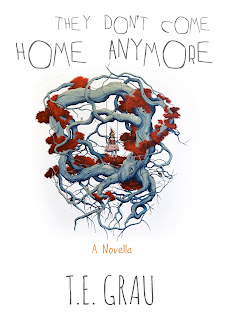 Where A House at the Bottom of a Lake is all about depth, it could be argue that They Don’t Come Home Anymore is all about shallowness as it’s a trait displayed by many of the novella’s characters. Much of what I appreciated in Ted’s collection The Nameless Dark were the characters he created to populate his stories. The horrors he placed them in were all the more effective because they were believable and fully-formed and it’s no surprise to find that those character building skills are prominently on display here too.
The story follows lonely Hettie’s attempts to ingratiate herself with Avery, the most popular kid in the class. Following Avery’s hospitalisation with leukaemia - an event which is televised, such is the state and integrity of TV news these days - Hettie steps up in her quest, determined to save the other girl by whatever means necessary.
So begins her attempts to find a real vampire, for who better to cure a cancer of the blood and provide lifelong – everlasting – immunity?
Her quest takes her on a journey through the counter-culture of LA, leading her to an arcane bookstore with a cynical owner then onto a book signing by a cult authoress of vampire books. It’s here she encounters another group – not fans of the author, too cool for that - who claiming to be “real” vampires she's looking for.
There’s much joy to be had here in the author’s dissection of the personas his characters inhabit, peeling away the façade of style to reveal the cynical shallowness behind. The vampire chic presented by them is little more than a front for the truly horrible people they really are.
Nasty – but nothing as compared to actual, real vampires…
It’s a fine moment when the book changes tone from what has been almost a satirical look at the artificiality of horror and those who embrace it as a lifestyle in an effort to fit in or look cool and introduces some real horror of its own. It’s a bold move but one which pays off handsomely.
There are still twists to come though, a few more surprises for the reader before the book reaches its conclusion. There’s a lot going on in They Don’t Come Home Anymore, a rich vein of themes dare I say – artificiality, peer-pressure, loss of innocence, a sense of identity and many more besides - perhaps demanding a second read through to fully appreciate them all. It's a book which deserves real critical analysis - a much deeper and more detailed critique than this one but I have to say I loved every word of it.
To label both of these novellas as “coming of age” stories is perhaps too simplistic but the choice of having protagonists on the cusp of adulthood is definitely significant. Both are incredibly imaginative pieces of work and, in keeping with the subject matter of the Malerman book, definitely have a lot going on beneath the surface. Both are insights into human nature and, although they perhaps approach the subject from different directions, what they uncover is compelling.


I highly recommend both novellas, which you can buy here.
Posted by Anthony Watson at 09:28

Email ThisBlogThis!Share to TwitterShare to FacebookShare to Pinterest
Labels: A House at the Bottom of a Lake, Josh Malerman, novella, review, TE Grau, They Don't Come Home Anymore, This is Horror