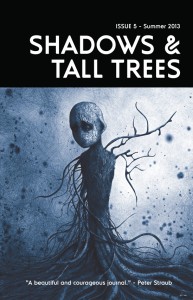 Shadows & Tall Trees 5 is the latest edition of the literary horror journal from Michael Kelly’s Undertow Books.It so happens that it’s the last time it will appear in this particular incarnation, as from here on in, the stories will be published as a yearly trade paperback. That’s a shame in one respect given that the publication will be less frequent but, given that it’s quality – not quantity – that really counts, it’s not that big a hardship as the stories Michael collects are consistently of the highest quality.
Issue 5 which, like issue 3 has glorious cover art from Eric Lacombe, maintains that high standard of quality with aplomb, containing eight wonderful stories and, in a development I’m very happy to see, a non-fiction essay on Charlotte Perkins Gilman’s The Yellow Wallpaper by V.H. Leslie whose Senbazuru was one of the highlights of Issue 4.
The fiction gets off to a cracking start with Gary Fry’s New Wave, a story of startling imagery and dark secrets that perfectly balances reason and logic against supernatural terror to create the right amount of ambiguity in a haunting tale with a killer last line.
Casting Ammonites by Claire Massey is the shortest story in the collection but was another of my favourites, its short length actually a bonus in that I read it and then re-read it pretty much straight away, trying to interpret what this labyrinthine, enigmatic tale was all about. I’m still not sure I have, but therein lies its true pleasure.
Next up is A Cavern of Redbrick by Richard Gavin which was the highlight of the issue for me for its wonderful writing and the way it subtly, by suggestion and implication, uncovers a dark secret from the past.
The narrative voice in D.P. Watt’s Laudate Dominum was a little too didactic for my taste although a necessary device given the story’s protagonist whilst Moonstruck by Karen Tidbeck provides a heady mix of lunacy – in its most literal sense – and menstrual angst in an (almost) apocalyptic fable.
Ray Cluley has fun with a horror cliché – the hiker wandering into a lonely pub and hearing the locals telling scary stories – and I did too reading Whispers in the Mist, a story that plays with the reader’s expectations right up until the very end.
The Other Boy by Daniel Mills is another beautifully written ghost story where childhood tragedy haunts the present day and Widdershins by Lynda E. Rucker completes the collection with a story that uses another classic horror trope of the newcomer/outsider uncovering dark secrets, doing so in a most effective way.
Michael Kelly has once again demonstrated his unerring skill in selecting stories of the highest quality for Shadows & Tall Trees, stories that stimulate both intellect and emotion. Issue 5 may mark a farewell to the current format but I’m confident that the high standards already achieved will be maintained in the new annual collection. The new volumes are promised to be “bigger and better” – I can’t wait to find out.


You can buy Shadows & Tall Trees  here or, if you prefer, here or even here.
Posted by Anthony Watson at 17:53 No comments: 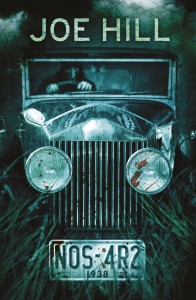 I already knew who Joe Hill was - or rather who his father was - before I started reading his books. I was determined not to let the familial connection sway my opinions of them, positively or negatively - but soon realised that this wasn't going to be an issue anyway, the quality of the writing on display was so high that any comparisons became redundant, Heart Shaped Box is one of the best first novels I've read and Twentieth Century Ghosts is an almost perfect collection of short stories. It was with some anticipation then, that I waited for the release of  Joe's new novel NOS4R2. (Or NOS4A2 if you're American - it's that whole tomato/tomato thing (a comparison that obviously works better said out loud than written down, (patronise/patronise maybe, nope, that's no better at all really))).
Anyhow, given I've now fulfilled an ambition to write a sentence containing three sets of brackets (parentheses), I can move on and say that NOS4R2 more than fulfils the promise of Joe's earlier books, indeed is even more impressive.
I hesitate to say something sound-bitey like "this is the novel in which Joe Hill finds his true voice" because in reality this is actually the book in which he comes closest to using his Dad's voice. This, I hasten to add, is not meant as any kind of criticism. In a book where one of the many themes explored is that of family it's entirely fitting that this should be Joe Hill's homage to Stephen King. The clues are there for everyone to see, with references to characters and locations from his father's books, (and his own too...). The family pet is a St Bernard reminiscent of Cujo, NOS4R2 is the registration number of a Rolls Royce Wraith with similar "properties" to King's Christine and the main character Vic McQueen has a special gift that leaves her damaged every time she uses it much like Johnny Smith from The Dead Zone.
NOS4R2 is a big book, but then it has to be to cram in all the themes, references and plotlines. It works on so many levels, a criticism of the commercialism of Christmas, a treatise on the power of creativity, a love story, a "vampire" story, a superhero story... the list goes on. It's so skillfully written though that you never feel overwhelmed by everything that's in there, all the disparate elements combine with each other to form a perfect whole. Holding it all together are well drawn characters about whom you care deeply driven along by a plot that will keep you hooked through the entire (just short of) 700 pages. For any fan of horror fiction, reading NOS4R2 is like having all your Christmases come at once.
Hill has created an iconic villain in Charlie Manx, a truly horrifying creation with real depth who - despite carrying all the vampire references around with him - manages to come across as original and unique. His Renfield - Bing, The Gasmask Man - is an equally impressive creation.
You'll laugh, you'll cry (really, you will...) but most of all you'll be moved and entertained. I can't fault NOS4R2 on any level, it's already my favourite novel of the year and it's going to take something truly spectacular to dislodge it from the top spot.
Posted by Anthony Watson at 11:59 No comments: