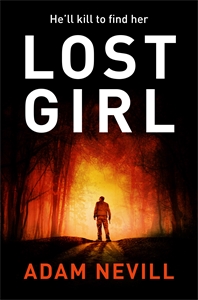 Lost Girl is the new novel from Adam Nevill and is published by Pan Macmillan. Since his debut novel, Banquet for the Damned, published in 2008 Adam has steadily built up a reputation as a writer of some of the most terrifying stories ever committed to paper. The imagery he creates on the pages of his books is as affecting as anything seen in a horror film but he manages to create the effect without the benefit of cinematic techniques, crashing chords and jump cuts – rather painting those images in the reader’s mind with elegant prose, planting them in the subconscious, conjuring up scenes that will haunt for years to come. There’s a scene in Adam’s Last Days that still genuinely creeps me out three years after reading it for the first time.


It takes real skill as a writer to properly scare a reader but Adam has it in abundance, no one is better at conjuring up the shadowy entities that scuttle in the darkness, that are barely glimpsed from the corner of an eye. Having recovered from last year’s tour de force of terror which was No One Gets Out Alive, it was with much anticipation that I awaited the publication of Adam’s next book, curious as to what horrors he would be inflicting on us this time around.


So here it is, Lost Girl, a novel which, it has to be said, marks somewhat of a change in direction for the author. The novel displays a shift from the overt horror of Adam’s previous novel towards more of a thriller – albeit one with a Sci-Fi vibe to it, set as it is in the future, a time when the impact of Global Warming is manifesting itself in the form of massive environmental breakdown with attendant mass migrations as people flee those countries where temperatures are too high to sustain life. Throw in an outbreak of a deadly virus and what you have is a truly apocalyptic vision – one which is perfectly, and plausibly, realised.


A disappointment then? No dark terrors to haunt the psyche?


Absolutely not. This is an outstanding novel and one which confirms Adam Nevill as a great writer, not “just” a great writer of horror fiction. It’s been his writing style, as much as the horrors on display that have made his books such a joy to read. There’s a slight change noticeable in Lost Girl though, perhaps a more “literary” feel to the writing. It’s distinctive prose, evocative and poetic, take for example these descriptions:


… had been born partially stricken by so many solvents of the heart, which would readily burst into flame and char the imagined future times when all could be normal, or manageable.


There’s beauty in the words and their phrasing. Not so much in what they describe however…


The plot revolves around the abduction of a child and the father’s attempts to track down and rescue her – describing the lengths he goes to in order to achieve those aims, charting the breakdown of his character, mirroring as it does the breakdown of society all around him. Some very dark things happen in this book – and most of them are done by the father, the “hero” of the story. He is never named, is referred to throughout simply as “the father”. Whereas at first this may seem a distancing technique it actually works extremely well. By not giving his name, the character is defined by what he is rather than who and by dint the whole notion of what it means to be a father is put under the microscope. How far would a father go to save his child is the question posed here and it’s a though-provoking but at the same time disturbing  read that results – the reader wants the father to succeed but at the same time will be horrified by what he does to achieve that success.


The societal breakdown in which he finds himself means that there is little or no support from the police and so it’s under his own steam that the father journeys through the dark underbelly of human existence to find his daughter (albeit with some help from anonymous contacts who provide some guidance via telephone).


The horror element in Lost Girl is far less overt than in Adam’s previous novels but it is there in the shape of King Death, a gang with connections to The Church of Last Days, introduced slowly and subtly with graffitied images and paintings in cellars but growing to full fruition in a marvellous chapter describing the father’s journey through a chapel and in which an important character is introduced. It's a wonderful piece of writing, terrifying in its imagery and the narrative twists it provides.


Lost Girl is an outstanding novel, a gripping, terrifying read from an author who never fails to deliver. It’s a book that ably demonstrates that the horrors that arise from human nature itself are just as terrifying as those of a supernatural nature. It’s a novel I highly recommend.
Posted by Anthony Watson at 18:26 No comments:

It was a blow, last year, to the world of weird fiction when Michael Kelly announced that Shadows & Tall Trees Volume 6 was to be the last in the series. The journal had, since its inception, been a source of fine writing - containing literary tales of strange, unsettling fiction of the highest quality. However, one of the authors featured in that final volume (and whose story Vrangr was one of its highlights) has come to the rescue of connoisseurs of literary horror by producing his own volume of weird fiction, Nightscript 1 - a book containing twenty - yes twenty - beautifully written stories which undoubtedly would have graced the pages of S&TT had it still been in existence.
The writing throughout is of the highest quality and C M has done a great job in selecting the stories to be included. A further link to S&TT comes with the inclusion of A Quiet Axe by Michael Kelly himself, the shortest story in the collection - more of a prose poem truth to tell - but which loses none of its impact as a result of the low word count. With so many stories included, it would be impossible to review all of them individually and do them justice, suffice to say that there isn't a poor one among them. The risk with having so many tales in one volume is that there will be "fillers" but that most assuredly is not the case with Nightscript 1, all of the stories contained within have earned their place, all are of (as previously alluded to) the highest quality.
The subject matter of the stories varies widely but none are anything less than truly weird. There's reincarnation and lycanthropy, restless spirits and things which creep in the shadows. My own personal highlights were Damien Angelica Walters' Tooth, Tongue and Claw which provides an alternative take on the Beauty and the Beast legend (and which serves as a companion piece to her marvellous collection Sing Me Your Scars) along with Ralph Robert Moore's Learning Not to Smile, a typically imaginative - and extremely strange - story which has much to say about medical (and dental) care in America and culminates in a truly jaw-dropping conclusion. Another favourite was David Surface's The Sound That the World Makes, a slow-burner of a tale that leads to an ending which still gives me shivers just thinking about it.
Nightscript 1 is a worthy heir to Shadows & Tall Trees - C M has taken the mantle and run with it, producing an excellent book containing some of the best writing you'll come across this year. It's a book I recommend highly that you should purchase - which you can do here.
Posted by Anthony Watson at 10:17 No comments: 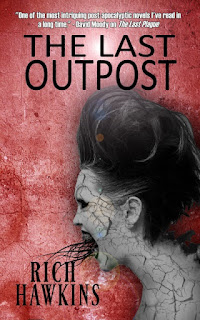 The Last Outpost is the new novel by Rich Hawkins and is the sequel to The Last Plague. Both books are published by Crowded Quarantine Publications.. I read The Last Plague having been introduced to Rich’s writing via his novella Black Star Black Sun and thoroughly enjoyed this particular take on the apocalypse, an end of the world scenario which merged Lovecraft and zombie tropes in spectacular fashion, producing a novel which has rightly been nominated for a British Fantasy award.


The first novel described the apocalypse itself, the moment when (possibly) the stars were right and the titular plague ravaged humanity, turning its victims into ravening hordes of monsters – the “infected” – human beings metamorphosed into horrifying shapes and forms with an insatiable blood-lust. Although focussing in on a small group of characters, the novel was epic in scale, full of marvellously executed set-pieces and horrifying imagery.


The Last Outpost takes up the story not long after the events of the first book are over and as such, is more concerned with the aftermath of the plague. Whilst the first book was an action-packed rollercoaster ride (© reviewer’s clichés) this is a more sedate piece of writing, introspective even, almost a stream of consciousness from the character of Royce, a survivor of the plague, now wandering alone through the ravaged countryside.


There’s much existential angst going on here, with Royce having to come to terms with the new world he finds himself in as well as the death of his wife and daughter. This is bleak stuff but credit is due to Rich for taking this path and also for the quality of the writing on display here. In effect, it’s an extended soliloquy but one that’s full of real emotion, the writing spot-on, poetic in parts.


The bleakness conveyed in Royce’s inner monologue draws favourable comparison to Cormac McCarthy’s The Road conjuring up similar feelings of desolation and despair as that classic book and, like The Road, an encounter with other survivors provides a pivotal moment in the book. There’s a change in tone about halfway through The Last Outpost where a set-piece within a house provides one of the most intense passages of horror writing I’ve come across in a while.


The second half of the book provides more action and introduces more characters but the overarching feeling of despair is never lost, lurks constantly in the background. The title of the book comes from rumours of a settlement of survivors on the other side of the North Sea, the journey towards which provides the main narrative thrust of the story but it’s the characters who count here, Royce himself, George – an elderly man he meets on the way and Amy, pregnant and so fighting for the survival of her unborn child as well as her own.


It’s the journey that’s important though, not the destination and quite a journey it is too. Rich has created an entirely believable world here, one in which the horrors come from not only the infected, and the mighty Titans which swoop through the skies above but from the darkness that lies within all of us. The book does however end on a note of optimism, hope even – made even more profound by the events leading up to (and especially immediately before) it.


The second of a trilogy is always regarded as the darkest and that’s certainly the case here. Bleak and nihilistic but beautifully written The Last Outpost is a book I highly recommend and I look forward with great anticipation to whatever happens next…
Posted by Anthony Watson at 11:18 No comments: