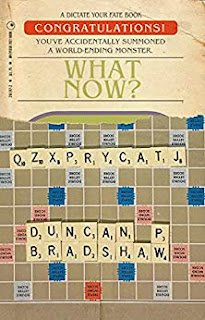 CONGRATULATIONS! You’ve Accidentally Summoned a World-ending Monster. What Now? is the latest offering to spring from the loins of author Duncan P Bradshaw, those same loins which have already produced a number of books with really long titles. Like the best marmalade, the book is thick and chunky, the spine of the paperback alone is an incredible one inch (24mm) wide and the volume weighs in at an impressive 17oz (482g). If these amazing statistics alone aren’t enough to convince you to buy it (bear in mind there’s a kindle version too but it’s difficult to make any kind of anthropometric measurement of a virtual medium - but let’s say it’s 21g which is the weight of a hummingbird or a human soul) then maybe the words inside will be.

There are loads of them, verbs, nouns (some of them proper), adverbs (I know!) and adjectives – all arranged in an order which makes them instantly readable and sometimes hilarious. The most important word in that sentence, of course, was “order” because that’s the key to enjoying this book to its fullest, is indeed the principle upon which it has been created/extruded from loins. The thing is, the reader themselves decide on the order in which the pages within are read!

I know, this is a major dereliction on behalf of the author; reading books is supposed to be relaxing, an activity done for pleasure and here we are having to do ALL the work. There are however, ample instructions as to how this might be achieved; at the end of some sections a choice is presented to the reader as to which page to go to next, each of which will lead the story down a different path. (In the kindle version, this is achieved by the use of hyperlinks like this one). It’s a clever concept and one which – if it hadn’t been for Edward Packard coming up with the idea of the Choose Your Own Adventure books – would be totally unique. Readers who manage to ignore the feelings of paranoia born of wondering if they’ve chosen the right path and stressing over whether they’re going to be lost in a never-ending maze within the book will enjoy themselves greatly, following the eclectic bunch of characters to not one, but TEN different endings. The challenge of course is to find them all, and minimise the number of times you say “bollocks, I’ve been this way before”. As an added bonus, there’s a hidden section which will take the (crafty clue-solving) reader into a completely different realm (not literally) in which they will uncover – shall we say – stories within the story…

As to the plot… well, the title pretty much sums it up and to be honest, I can’t be arsed to review ten different stories. It is hugely entertaining though, with lashings of the trademark Bradshaw humour and surrealism with enough fourth wall breaking to satisfy even the most ardent and critical aficionados of postmodern metafictional mucky jokes.

Joking aside, the book truly is a wonder to behold. It’s mind-boggling to contemplate the amount of work that must have gone into producing it. It’s an amazing achievement and one which has been pulled off with aplomb (see mucky jokes above).

I loved the time I spent wandering around aimlessly in the dark corridors of this book. In the best traditions of GoreCom, it will have you laughing out loud one moment and stifling a gag reflex the next (sometimes simultaneously actually). It could well be the author’s finest hour (or minute if you choose ending seven).

By way of homage to the book and its central theme of “be careful playing word-based games, you never know what might happen” and also to a key character who – despite only warranting a couple of sentences – provides the beating heart of the novel, here’s a wordsearch puzzle containing a number of key themes from CONGRATULATIONS! You’ve Accidentally Summoned a World-Ending Monster. Which you should buy. Now. 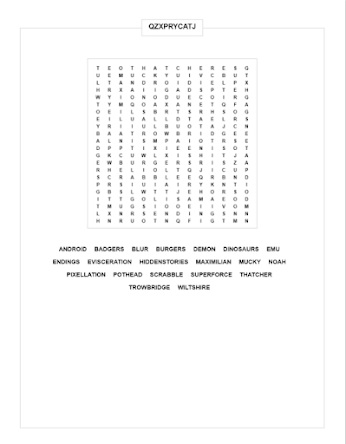 Posted by Anthony Watson at 13:05 No comments: