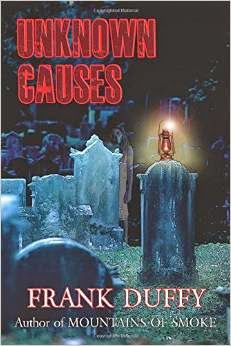 Unknown Causes is a collection of eighteen stories by Frank Duffy and is published by Gallows Press. The book was my introduction to Frank’s writing and, having now read these tales of subtle and understated horror I can honestly say that I’m glad that introduction was made as what’s contained between its covers is some of the most unsettling fiction I’ve had the pleasure – if that’s the right word – of reading in quite some time.
Many of the stories herein are vignettes, short glimpses into bigger narratives and it’s a device that works splendidly, raising questions in the reader’s mind (most frequently – it has to be said -  “what the hell is going on here?”), questions that aren’t always answered – at least not directly. The prose is beautiful, poetic even, but these stories make demands of the reader, the brain definitely needs to be fully engaged to get the most from them. Those looking for resolution, for clear explanations of the strange events which unfold will be disappointed.
This is a good thing.
I always feel it’s slightly lazy to compare writers with one another, something that carries with it the risk that you somehow suggest an element of unoriginality but I think the stories within Unknown Causes do bear favourable comparison with the writing of Ramsey Campbell with their suggestions of something intangible, but not quite right lurking just out of sight and also, befittingly given that this year is the centenary of his birth, Robert Aickman whose trademark Weird Unexplained Shit (I forget which learned journal I lifted that reference from) is lovingly recreated here. Reality is altered within these tales and ambiguity abounds leading to a sense of dislocation, an uneasiness in the reader. These stories will disturb you.
As befitting such a haunting collection, ghosts and spirits glide in and out of its pages - malevolent and benevolent, sometimes making reparation, sometimes making demands. A creeping sense of paranoia infiltrates many of the stories, horrors both internal and external are explored. Revenge is a recurring theme as is that of familial relationships. Many of the characters populating the stories are lost – and not just in the literal sense of the word. A couple of stories are more traditional fare with twists in the tail and feel almost like light relief from the darkness that surrounds them. Not that light though…


Unknown Causes will take you to some very dark places – and sometimes you won’t even know how you got there. Reality has never felt as fragile as it does in these eighteen stories and Frank Duffy’s elegant prose creates a palpable sense of unease. The tales which unfold here do precisely what good horror writing should – unnerve and unsettle the reader. It’s a collection I recommend thoroughly.
Posted by Anthony Watson at 09:13 No comments: 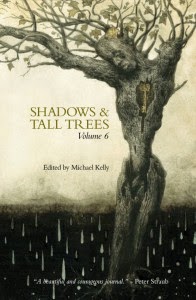 
In his introduction to the book, Michael Kelly states that he believes short stories are “the perfect art form”. It’s a bold statement to make but he’s backed it up with enough evidence here to make it a hard one to argue against. The book is dedicated to the memory of Joel Lane and I can’t think of a more fitting tribute.
Posted by Anthony Watson at 11:04 3 comments: