Made for the Dark 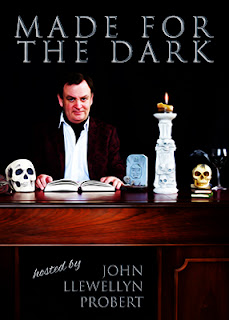 Made for the Dark is the new collection from John Llewellyn Probert and is published by Black Shuck Books. There are eighteen stories within the book, all of which act as a marvellous showcase for one of the most distinctive voices in horror today.
Previous collections from John (The Catacombs of Fear, The Faculty of Terror) were presented as portmanteaus – with the stories linked by a bridging device and that concept has been taken a step further with this collection, containing as it does an introduction to each story from the author a la Twilight Zone. It’s a clever technique, pulled off admirably – aided greatly by the front cover picture of the great man himself seated behind a desk, waiting to show you his special somethings…
I’m still waiting to hear from the OED for official recognition but many moons ago I coined the term “proberty” (as defined here) and it’s a word I’m more than happy to apply to this collection which I would be so bold as to describe as quintessential. It’s a difficult art, combining horror and humour and can, in the hands of a less skilled practitioner go horribly wrong but that’s certainly not the case with John’s writing. Much of what he describes is truly awful and I’m sure I’m not alone in imagining – whenever something gruesome and outlandish happens to a character – the author waiting for a reaction, a slight arch to one of his eyebrows and a tilt to his head, “are you really going to laugh at that..?”
Actually, I might be alone in that.
The humour, of course, helps to leaven the impact of the horror but it’s still extremely effective and some of the stories in this collection are worthy of Barker at his best. (By which I mean Clive and Ronnie).
If Made for the Dark is the quintessential JLP collection then I would suggest The Anatomy Lesson is the quintessential story, containing as it does just about everything you might wish to find in a proberty tale, Grand Guignol horror, an element of performance and… doctors. John is of course a doctor himself so it’s no surprise to see that particular profession cropping up in many of the stories in the book, including pulpy crime story The Girl with no Face, Victorian apocalypse Out of Fashion and The Secondary Host – possibly my favourite story in the book. Telling the story in first person necessitates a change from John’s familiar narrative voice and I think that – and the lack of the trademark comedy flourishes - make this an extremely effective chiller with a marvellous premise and mythology to back it up.
The Girl in the Glass also has a doctor as its protagonist but is also a cleverly constructed ghost story (using a very effective image as a reveal) and ghosts also crop up in Six of the Best – a glorious attack on TV ghost-hunter programmes with a nasty twist to it, not to say some very mucky bits.
There’s a touch of cynicism in that tale, a feature of some of the other stories; The Life Inspector and How the Other Half Dies gently rip apart their protagonists’ characters but the harshest treatment is given to charities in It Begins at Home – in which art imitates life – but not in a good way. (Interestingly, the story preceding this, the WW2 set The Death House with its heady mix of Nazis and Lovecraftian horror could be a case of life imitating art). A similar theme to that of It Begins at Home is to be found in The Lucky Ones, a title dripping in irony if ever there was one.
Humour is one of John’s trademarks for sure, but – as he displayed emphatically in his novella Differently There – he’s equally as capable of melancholy and pathos. This is admirably demonstrated in A Life on the Stage – a theatre-set swansong to bring the house down and The Man Who Loved Grief – a fairytale-esque (albeit a rather grim one) meditation on love and – well, grief.
There’s plenty more to enjoy besides these, tales of reincarnation, ancient rituals and the perils of reviewing online. There’s even – much to my delight - a weird western, Blood and Dust complete with an invisible monster a la Forbidden Planet (the film – not the shop) which is the final story in the book. With its fish out of water protagonist English professor John Summerskill, it’s closer in tone to The Sherriff of Fractured Jaw than Unforgiven but I enjoyed it immensely and it’s a fine end to a very impressive collection.
I enjoyed every moment I spent between the covers of Made for the Dark. For those already familiar with John’s writing it will be like settling down for a natter with an old friend (preferably in front of a roaring fire with a snifter of brandy) whilst for those yet to encounter his work it’s the perfect introduction.


Very proberty indeed.
Posted by Anthony Watson at 09:37 No comments:

Email ThisBlogThis!Share to TwitterShare to FacebookShare to Pinterest
Labels: Black Shuck Books, John LLewellyn Probert, Made for the Dark, review 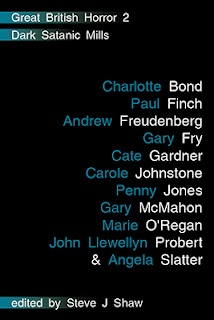 
I enjoyed Dark Satanic Mills a lot, and it’s a strong follow up to Green and Pleasant Land. It’s a wonder as to which of the lyrics of Jerusalem will be chosen for Volume 3 – an anthology of chariot stories perhaps, or will mountains be the subject? To be honest, it doesn’t really matter – the urban theme was pretty much incidental to most of the stories in here with perhaps only the Johnstone and Slatter stories using the city as a character but that didn’t diminish the enjoyment of them. Whatever the theme, I look forward to next year’s release, this really is shaping up to be a great British series of books.
Posted by Anthony Watson at 09:24 8 comments:

Hasty for the Dark. 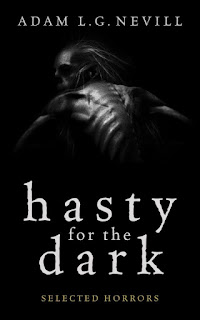 
This is a stunning book in every regard, a wonderful retrospective of one of the most gifted purveyors of horror fiction currently plying their trade. It’s t be hoped that this yearly ritual of short story releases continues into the future, I for one can’t wait to see what happens next.
Posted by Anthony Watson at 11:15 No comments: