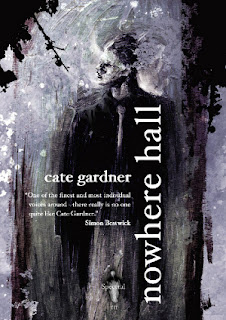 "Ache Ron, do you... AcheRon." Words that mysteriously appear on a mirror of the Vestibule Hotel, and words that hold the key as to what lies at the heart of Cate Gardner's Nowhere Hall.
This is the third in the series of chapbooks produced by Spectral Press - high quality publications featuring the work of the best names currently working in dark fiction.
Following stories from Gary McMahon and Gary Fry - both of which I enjoyed very much - Nowhere Hall tells the story of Ron Spence who, at the beginning of the story is hell-bent (or Hell-bound..?) on committing suicide by stepping out into traffic. A change of heart leads him to instead enter the Vestibule Hotel wherein awaits a host of bizarre experiences and flashes of his past life.
Ron is confused by what's happening around him and so too is the reader - but in a good way! There's a lot of symbolism here - much of it, I have to say, lost on me - but that doesn't detract from the enjoyment of the story.  Just go with the flow and let the imagery wash over you and you'll have a great time reading this.
What's it all about?  You'll have to judge for yourself but the word-play I quoted at the start of this review provides the answers in my head.
It's a beautifully written piece and absolutely maintains the high standards already set by Spectral Press's previous publications.  I'd obviously recommend it but to do so would be academic as all copies have already sold out. It's great to see horror so well served by a publisher with such high stanards of quality. Continued success seems assured for Spectral - which is great news indeed.
Posted by Anthony Watson at 15:16 No comments:

A really strong issue this one - I flew through the stories a. because I enjoyed them so much and b. because they're all really short.  Perfect length in fact, there's nothing worse than a short story that out-stays its welcome (except maybe a novel that does the same, although there's more likelihood of giving up on a novel part way through -  I'll stick with a short to the bitter end).  The articles were as entertaining as ever, my favourite being Stephen Volk's Coffinmaker's Blues - I always find names a problem when I'm writing and frequently chicken out completely and don't use them. (Or I'll sometimes use names that are clever in-jokes - or at least what I imagine to be clever in-jokes). As for the stories:
Dermot by Simon Bestwick is first up and quite an opener it is. The story is cleverly written, raising questions as to what exactly is going on (who is this Dermot bloke? What exactly is Special Projects?) before revealing all - as is appropriate - at the climax.  And what a climax!  From mundane beginnings - man gets on bus - to something quite fantastic (in all senses of the word).  Dermot has special skills, skills he shares with the police for the "good" of mankind.  Those skills come at a price however - and the discovery of what that is provides a genuinely horrific and hard-hitting end to the story.  I'm new to Simon Bestwick's writing but have been impressed by what I have read - this story and his contribution to Death Rattles.
A Summer's Day by K. Harding Stalter is up next, and takes the form of a stream of consciousness (or perhaps unconsciousness) from the mind of what appears to be a human guinea pig for neurological "interventions".  Areas of his brain are probed to see what reponses are induced - all in front of an audience of students. There's no context given as to why this is happening - although the implication is that he is a criminal rather than a patient.  It's this lack of context that makes the story so strong however - given that these are internal thoughts being described it's hard to know what's real and what's being induced by the insertion of a range of probes into his brain.  As to the climax, it's open to any number of interpretations - which can sometimes be frustrating but works wonderfully in this story.
Recently Used is by Ramsey Campbell, a writer whose work made up a major proportion of my reading in the eighties and nineties, providing a more understated counterpoint to the (albeit enjoyable) excesses of Clive Barker.  I have such admiration for him that I was a bit daunted at the prospect of reviewing one of his stories ("I am not worthy...") This is, however, a beautifully written story - an examination of loss and grief.  It's incredibly sad and the ending is really powerful, offering little in the way of hope. Scary and moving - it doesn't get any better than that.  The best story in this edition.
Still Life is by Simon McCaffery and is a story I enjoyed very much.  Bizarrely enough, a while back I wrote a story about the type of creature that features in this tale and also used the Gulf War as a kind of backdrop to it.  I'm glad to see that Simon had more success with his story with regards to publication (mine currently languishes in the files of Triskaideka Press, awaiting the inevitable rejection slip...) as it is a very enjoyable piece of writing, a nice piece of gothic horror with a modern slant.
How The 60s Ended By Tim Lees is the last story and unfortunately - in my opinion - represents a fall at the last hurdle in terms of the quality of the stories in this edition. Which sounds a bit harsh - and probably is.  I didn't enjoy it as much as the other stories mainly because of the style it was written in - I don't have any problem with first person narratives but this one was written in a very staccato style, lots of short sentences, almost like bullet points and didn't flow very well. It's a melancholy story - as befits its subject matter - but I'm not entirely sure what it's doing in a horror magazine as it's a real stretch to classify it in the genre.
All in all though, a really strong issue and further proof that Black Static really is the best of its kind around. (Preferred the old covers though...)
Posted by Anthony Watson at 15:30 No comments: 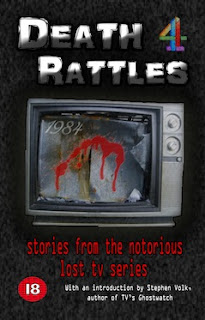 Death Rattles is published by Gray Friar Press and is a collection of six stories supposedly based on a television series of the same name that aired on Channel 4 in 1984.
Ah yes – Death rattles – I remember it well… Except I don’t. As I’m sure the majority of horror fans won’t. It was massively controversial at the time (apparently), pushing the boundaries of taste as far as they would go. So controversial was it, in fact, that the tapes were destroyed…
Can’t remember that either.
Fortunately, the six authors involved in this collection did manage to catch an episode (albeit in circumstances that made the viewing experience fuzzy and hazy…) and, on the back of those memories have recreated the episodes as the stories that make up this collection.
Each story is introduced by the author’s recollections of their viewing experience. These are really entertaining – Simon Bestwick’s friend actually had copies of the series but – in a bizarre twist of fate that seems to surround every aspect of these programmes – he’s arrested and the police – yes the police! – destroy the tapes, thereby losing any real proof that the programme ever existed…
The collection has an introduction by Stephen Volk – no stranger to controversial TV drama, having managed to convince a hefty proportion of the population that his Ghostwatch was a real outside broadcast – which is again thoroughly entertaining, charting the history of the programme and its creator, Dennis Shapiro, a tale so bizarre it’s almost hard to believe…
This series was so controversial, so the introduction goes, because it showed the viewer trauma, in a gritty, social realism style. Strange then that the first story (or “Episode 1”) is Scattered Ashes by John Llewellyn Probert, a story of revenge from beyond the grave that would actually be more at home in the “Hammer House of Horror” series which everyone remembers. It’s a fairly classic gothic horror story which would hardly cause the controversy it apparently engendered at the time.
Next up is Seen and not Heard by Gary Fry. Another revenge from beyond the grave story that culminates in a scene worthy of a 1980’s video nasty. I feel the ending comes out of left field somewhat, not gelling with what’s gone on before which is actually an effective psychological chiller. We’ve all had dreams where we’ve been unable to speak, make a noise when there’s something we desperately need to tell someone and this concept is neatly turned on its head in this story where it’s the ghosts who are silent –something that adds to their menace.
Antlers by Thana Niveau is a story that starts off with the classic set up of a woman alone in a house with a weird bloke. Events turn horrible as might be expected but the way in which they develop is totally bizarre. The final images are shocking but I get the impression that this was an image Thana Niveau (sorry – Dennnis Shapiro) had in mind and that a story was clagged onto it.
The Children of Moloch by Simon Bestwick is by far the strongest story in the book and I can imagine if it was actually broadcast as a TV show the attendant controversy and outrage would be as described. It’s a hard hitting story of institutionalised abuse – and its consequences. It doesn’t pull any punches and is a “difficult” read – but an extremely powerful piece of writing.
Cow Castle by Paul Finch is the longest story in the book (presumably the original TV episodes were of varying running times) and one that I found to be a wee bit too long. It’s always difficult reading a story in which none of the characters are sympathetic and this was certainly the case here. There’s a fair bit of sexual content in here and it’s unfortunately presented in, at times, fairly gratuitous fashion. I was disappointed in it because I’d enjoyed One Monster Is Never Enough by the same author. The climax (!) of the story is a long time coming (!) but by the time it arrived I was so fed up with the characters I didn’t care what happened to them.
His Father’s Son by Gary McMahon is the last story in the book and tells of an unfaithful husband paying for his sins in the most terrible of ways. It features themes of guilt and retribution which are common to many of Gary’s stories.
It’s a strong finish to a collection I was ultimately a bit disappointed in. Whether or not Death Rattles truly did exist isn’t important (the stories mention the internet and DVDs but I guess that’s because they’re modern day “re-imaginings” of stories written in the ‘80s) – it’s a good concept for pulling together a group of tales but it’s unfortunate that I found the introductions more entertaining (and possibly more creative) than the stories themselves.
Posted by Anthony Watson at 12:37 No comments: