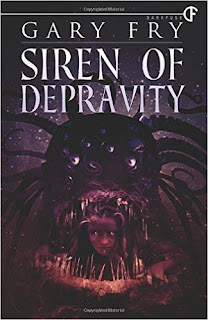 Siren of Depravity is the new novel from Gary Fry and is published by Darkfuse. It’s been two years since his last novel, Severed, although in that time he’s written a number of high quality novellas and short stories. I’ve enjoyed all the novellas but often felt that the ideas and philosophical musings contained within would be better suited to a longer form, allowing them a little more breathing space, room to expand – or expound even.
So it was with much anticipation that I delved into this new novel. Depravity’s not really my thing (not since that damned restraining order anyway) but I knew that the novel would contain a whole new take on the subject matter, would engage the intellect as well as the emotions.
The story begins innocently enough, at the seventh birthday party of Eva, the daughter of the book’s narrator Harry Keyes. It’s a small, family affair with a few school friends, Harry’s mother and his wife Olivia. When Harry receives a phone call from his estranged brother Dexter, things begin to get a lot worse…
A visit to Dexter uncovers a shock revelation about the family and sets the wheels of the narrative of the novel firmly into motion. The meeting between the two brothers is a beautifully crafted scene, slowly introducing a sense of unease and themes which will develop throughout the course of the novel. Harry’s brother is presented as a frail, shadowy figure and come its conclusion, the reader is left with the impression that there is much more to his request for a visit from Harry, it’s more than apparent that Dexter is sinister.
So begins Harry’s investigations into the dark secrets of his family’s past, in particular that of his abusive father, long dead. I loved this first half of the book, felt the first person narrative worked extremely well, involving the reader in each of Harry’s new discoveries, uncovering revelations and clues.
The story Harry uncovers is, I have to say, incredibly dark – perhaps the darkest I’ve seen from Gary. His travels take him into the depths of Northumberland, somewhat eerily to the towns of Morpeth – just down the road from where I now live – and Crawcrook, just down the road from where I was born and raised. Man, that’s dark… Joking aside, the story is grim, more than fulfilling the promise of the novel’s title.
Given the investigative/revelatory nature of the story I shall say no more about the plot for fear of spoilers. What I will say is that I thoroughly enjoyed it. Sometimes Gary’s stories are really just devices for putting across his ideas and suffer slightly because of that but this is a proper narrative, gripping and thought-provoking. There are nods here to Stephen King’s Revival – acknowledged by the author – with its considerations of the similarities between science and, not so much religion in this case but certainly arcane beliefs and rituals but also, I felt to Pet Sematery. Yes, it’s that dark. Much of the really grim stuff is related second and even third-hand but this distancing does little to diminish the impact.
The plot is full of twists and misdirection. As more dark secrets are uncovered, you’ll find yourself doubting all of the characters, believing them pretty much capable of anything. Is Harry’s journalist contact all he says he is? What of his wife – will there be an Olivia Twist? In the pre-publicity for the book, mention was made of the twists in the tale but rather than distract from the reading experience, I felt this enhanced it. No gimmicks here though, the revelations aren’t simply for shock value (though many are shocking), all of them are integral to the plot and serve the narrative admirably.


I loved Siren of Depravity, in my humble opinion it’s one of the best things Gary has written – certainly his best novel. It’s dark, grim and pretty unrelenting but I do recommend you read it. You can, and should, buy it here.
Posted by Anthony Watson at 09:50