On the Shoulders of Otava 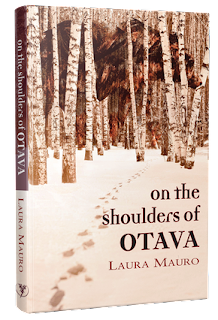 On the Shoulders of Otava is a novella by Laura Mauro and is published by Absinthe Books, a new imprint of PS Publishing. Its title is taken from a line of the Kalevala, a nineteenth century epic poem which recounts the oral history of Finnish folklore and mythology. Extracts from the poem provide epigraphs for each chapter of the book - appropriately so, given the prominence the mythology has in the narrative of the novella.

The story is set in 1918, during the civil war which raged in Finland as a result of the political vacuum left behind after the end of the First World War. This conflict was a horribly literal class war, fought between the mainly middle and upper class Whites and the Reds of the Socialist Workers’ Republic. The war lasted fifteen weeks but tens of thousands died, many at the hands of death squads and executioners.

The protagonists of On the Shoulders of Otava belong to a unit of the Womens’ Guard -  a division of the Red Guard. Around 2000 women served in such units, some as young as fourteen. The story focuses on the experiences of Siiri, and begins with her glimpsing a shadowy figure in a churchyard, wandering as if in a trance. This figure turns out to be a fellow – male - soldier who, the next day, carries out a violent, seemingly unprovoked, attack on the squad leader.

The scene describing the attack is cleverly written – as are so many within the book – with the action happening at a distance, almost off-camera and only its aftermath being described in any detail. The reader gets to share the shock of the book’s characters as the nature of the wounds which have been inflicted are revealed in the discussion that follows the attack.

This flash of violence also serves to introduce the mystical aspects of the story (although this is kinda foreshadowed with the gothic-tinged shadow in the churchyard scene). The attack was completely out of character for the perpetrator – a “goody-goody” by all accounts – but the possibility is raised that it could be linked to his prior disappearance on a hunting trip in the woods during which he experienced what may have been a supernatural event.

As the narrative progresses, and Sirii and her companions find themselves isolated in those same woods, so the supernatural elements come more into play. The choice of an ancient woodland as location is a perfect one and an incredible sense of atmosphere is generated by some wonderful prose. It’s an inspired choice of location too, given the prevalence of the natural world, and animals in particular, in Finnish folklore. Most notable among these are Otso, the bear - a major player in the creation mythology and Tulikettu the firefox. Amid the established mythology, Laura has added (as far as I can tell) her own invention – that of ghost-lighting. It’s an intriguing concept, and one which lies at the heart of the narrative - so any further discussion here will unavoidably lead to spoilers.

Finnish folklore is possibly less well known to most than other nations’ variations – not least the Norse mythology of their Scandinavian neighbours and therefore necessitates some introduction. This is done skilfully however; the stories are cleverly woven into the narrative, never once feeling bolted on, instead merging into the flow of the story seamlessly.

Ambiguity plays a big part of course. The best weird fiction balances the fantastic with the normal, allowing the reader to arrive at their own decisions as to what is real and what isn’t. It’s all too easy to fall into the trap if being too obtuse, and leaving the reader scratching their head as to what they’ve just read. Such is not the case here. That fine line has been navigated very successfully and the novella is as accomplished at creating a sense of awe and wonder as it is in recording the harsh reality of being at war in a hostile climate.

On the Shoulders of Otava is a wonderful piece of writing. It’s beautifully constructed, the themes it establishes in the opening scenes carried through consummately to the conclusion. It’s a (relatively) short read but manages to pack in some great characters (and their interactions and motivations), social and political comment that doesn’t bludgeon the reader, elegant prose (written in a hugely involving present tense), a brilliantly created sense of atmosphere and a salutary reminder of mankind’s place (i.e. insignificance) in the grand scheme of things. It’s a book I highly recommend.

Posted by Anthony Watson at 10:02 No comments: