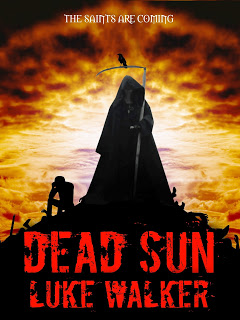 Posted by Anthony Watson at 08:42 No comments: 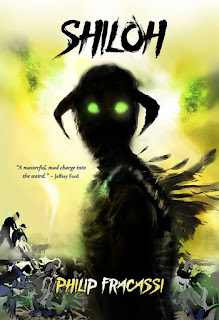 Shiloh is the new novella from Philip Fracassi, now published in paperback by Lovecraft ezine press following the release of a limited edition hardback version. Philip is a writer whose work I now anticipate with great relish, providing as he has some of my favourite reads of the last few years. That anticipation was pushed almost beyond limits at the news that the novella has a historical setting given my predilection for horrors set in the past.
As the title might suggest, the story takes place during the Battle of Shiloh during the American Civil War, April 6th – 7th 1862. “Suggest” is appropriate however, the battle as described in the novella is never given this name –and, whilst this is undoubtedly historically accurate given the story is told in first person, present tense – it also offers up the possibility that the title refers to something else – or someone else.
The aforementioned narrative voice is an ideal choice for the novella, making the reading experience immediate and personal, throwing the reader into the thick of the battle. These passages are brutal, vividly describing the horrors of warfare and the damage human beings can do to one another and are not for the faint of heart. The narrator is Henry, fighting for the Confederacy alongside his twin brother William. His voice is an authentic one, conveying the horror of his situation alongside his own emotional responses and, as the best first person narratives do, provides insight into his own character. Most notable of these, given what happens in the story, is his refusal to subscribe to religious belief, a decision made in the context of his upbringing as the son of a preacher.
This lack of belief in anything mystical is important as it adds veracity to Henry’s observations of what unfolds during the fighting. Much of the horror in Shiloh is visceral, the descriptions of the atrocities of combat, but there is supernatural horror here too, subtly introduced with some highly effective – and chilling – descriptions of strange figures glimpsed amongst the carnage but then building to a point where it is the dominant theme of the book.
Cleverly, one of the supernatural elements references a phenomenon which was actually reported during the battle (and which has only recently been explained) and Philip shows great skill in incorporating it into the narrative, weaving it into his own story, enhancing the eeriness of the story’s conclusion.
And what a conclusion… The subtle shift from visceral to supernatural throughout the story leads to an almost dreamlike final sequence, in essence the physical becoming the metaphysical. It’s a heady mix of allegory and mysticism in which themes of destiny, death and sacrifice are explored. War is a transformative experience for those involved, its effects dehumanising, turning men into monsters and it’s these ideas which power the final scenes of the book. The startling imagery which has featured throughout the novella continues here as Henry discovers the truth of what has been happening, a revelation which will change his world forever. It’s an incredibly powerful ending to what has already been a marvellous piece of writing and is, in my opinion, the author’s best work to date.
I loved Shiloh, loved it again the second time I read it. Also included in this edition is a short story, Soda Jerk which provides a taster for Philip’s forthcoming novella Sabbath. Consider my appetite whetted...

Posted by Anthony Watson at 19:11 No comments: