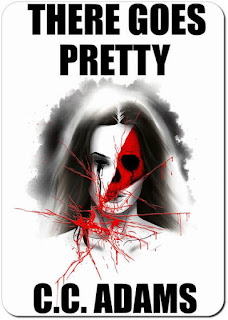 There Goes Pretty is the latest novella from Dark Minds Press, the eighth in the series. It’s penned by C. C. Adams, an author whose work I’ve enjoyed in the past (and who featured a favourite monster of mine in his earlier novella But Worse Will Come).

It tells the story of the relationship between Denny and Olivia and opens with their wedding at Shakespeare’s Globe in London. As the couple begin their new life together, so the cracks begin to show – more than the to-be-expected frictions of living together though, there is an external agent interfering with their plans.

A feature of all Of C. C.’s writing has been the excellent characterisation he produces and There Goes Pretty is no exception to this. All the characters within are well formed with traits and habits which ring true. The relationships between those characters is another strength of his writing and this is definitely to the fore here. The interplay between Denny and Olivia and the mistakes they make (with the associated over-thinking) will be familiar to anyone in a relationship.

With the groundwork done establishing the characters and their relationship (and with only a little foreshadowing), the supernatural elements of the story are introduced about a third of the way into the novella. I have to say that the two main scenes in which this happens are extremely effective, generating a real sense of terror and panic.

They’re effective too in the way they fit into the narrative, happening when the couple are apart, casting an air of ambiguity over them and leading to a situation where trust becomes a major issue for the newly-weds.

As the relationship deteriorates, so the rationale for the strange events is revealed. Whilst I was cool with the reveal I did feel that it could have been done in a more dramatic way than it is here, there’s no real “wow” factor to the revelation.

The book rallies for a strong, and clever, finish though – one that nicely plays with the themes of friendship, loyalty, trust and love which have run through the book.

I liked There Goes Pretty very much; it’s further evidence of an author on the brink of big things and a fine addition to a fine range of novellas. Once again the stunning artwork featuring the characteristic red/black colour scheme is provided by 77Studios.

You can buy There Goes Pretty here.

Posted by Anthony Watson at 10:41 No comments: