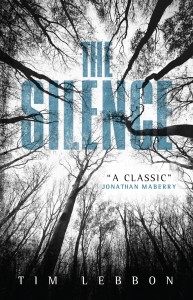 The world will end neither with a whimper or a bang but in total silence - at least according to Tim Lebbon's new novel The Silence. Well, not total silence as it happens but that's the concept at the heart of this new take on the end of the world.
The harbingers of the apocalypse in this instance are the vesps - prehistoric flying lizards that emerge from a cave in Moldova, unearthed by a scientific expedition. Life in the dark underground has rendered them blind meaning that they hunt their prey by sound alone - which is bad news for the human race whose noisy, modern existence provides food aplenty for the monsters.
In order to remain safe from the vesps, silence must be maintained and it's in this suppression of normal behaviour that comparisons can be drawn with Josh Malerman's brilliant Bird Box. In that novel, mankind had to blindfold itself, rendering itself blind - here the removal of noise to all intents and purposes results in a kind of deafness.
It's no surprise then that Ally, one of the main characters in the book, is actually deaf and it's her families 9enforced) ability to use signing that gives them an advantage over everyone else, living in a silent world is nothing new to them. The narrative focusses on the family's attempts to relocate to the wilds of Scotland, a place of (relative) quiet and hence safety and it's their journey - and their first hand encounters with the worst aspects of humanity - that takes up most of the book.
The opening chapters of the book were the most effective for me. The outbreak is at first reported on live TV but then picked up by social and other broadcast media, describing the inexorable spread of the killing hordes. The tension here is masterfully built with a palpable sense of dread created as the progress of the vesps towards the UK is monitored, and everyone realises that nothing will stop them. Each chapter begins with transcripts of TV and radio reports or blog/social media entries and it's a very effective device, building the tension to almost unbearable levels.
The vesps do reach mainland Britain of course and there the book makes a change in tone, becoming a survival thriller with some brilliantly executed set-pieces.
It's all high-concept stuff but it's a brilliant concept and what results is a tense, exciting and genuinely scary read. It cracks along at a blistering pace and really is a book you won't want to put down. (Though if you do, make sure you do it quietly).
I loved The Silence and heartily recommend it.