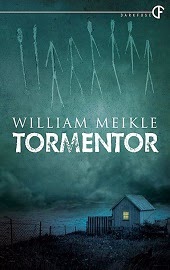 Tormentor is the latest novella from William Meikle and is published by DarkFuse. This combination has yielded some very impressive results in the past, both Clockwork Dolls and Broken Sigil were excellent reads, high concept stories delivered with consummate skill by the author so the signs were good that this would be another cracking read. And so it proves to be. Willie does sterling work writing stories using characters created originally by other authors (Sherlock Holmes, Carnacki, Professor Challenger), inhabiting and then expanding the worlds created for them in a hugely entertaining way but he's equally - if not more - impressive when creating his own fictional worlds such as is the case here.
The world created in Tormentor will be familiar to anyone who's read Willie's work, the book containing many of the themes he's explored and used in the past - Scottish folklore and history, ancient evil, an island location and err... fish. Not surprisingly, music has a big part to play in the story too and readers will soon find themselves "lost to the dance" once more as they immerse themselves in the atmospheric prose.
And it is atmospheric - the story relies so much on the location (the island of Skye) that the descriptions of the landscape and environment are as important as the unfolding of the narrative itself and these are handled marvellously, you can almost feel the cold on your face, smell the sea air. (And the fish).
The plot involves Jim Greenwood moving into the remote cottage he's just bought on Skye - a house, it turns out, with a long and mysterious history. Recently widowed, Jim has chosen the house as a means of running away from the world but the safety he feels there soon disappears as a series of stick figures begin to appear around the house, drawn in soot. The same figures then start appearing in emails sent to him...
The tension slowly builds from the appearance of the first figures and the pace of the story is handled brilliantly, a sense of paranoia and fear building as Jim tries to work out what the drawings mean, discerning, as he does, a pattern in the way they are presented.
There's some proper scary stuff going on in these passages, the author utilising the creepiness of the concept to its full potential. The denoument, when the explanation for the strange events is discovered, is eminently satisfying.
It could be argued that Tormentor is the quintessential William Meikle book, containing as it does so many of his trademarks as a writer. It could be,  the author has described how the story has been with him for a long time but only now has he felt he had the skills as a writer to do it justice.
It was worth the wait, Tormentor is a book I recommend highly.

Posted by Anthony Watson at 13:49 No comments: