There I was, all ready to post up a piece about how chapbooks are the saviours of horror fiction when someone else goes and does it before me. This piece on the excellent This is Horror website pretty much sums up my feelings about the current crop of high quality chapbooks available to all discerning readers of horror fiction. (And I wholeheartedly agree with the point that they're the perfect length to be enjoyed on a commute to work). This is Horror have started their own line of chapbooks to which I've eagerly subscribed, and if they're all of the same quality as the first - Joe and Me by David Moody, then it's a decision well made. I haven't read anything by David prior to this but Joe and Me has certainly whetted my appetite for more. It's a slow burner of a story, a first-person narration from Si, the "me" of the title, about his relationship with wife Gill and 8 year old son Joe. Si is a house-husband, Gill is a research scientist, developing an airborne vaccination against potential biological weapons. When the military take over the research it's clear that things are going to go badly - and so it proves.
This is a cleverly written story, apocalyptic but small scale at the same time, focussing on the family unit. The characters are all well drawn and entirely believable so that when the story reaches its conclusion, and a choice has to be made which will have profound effects not just for the family but the whole world, the decision arrived at is entirely believable too - and incredibly dramatic.
This is a great start to the This is Horror chapbooks and I look forward to the next issue in the subscription. That's going to be Thin Men With Yellow Faces by Gary McMahon and Simon Bestwick - which is pretty much my definition of a dream team.
The second chapbook I had the pleasure of reading on the train this week was The Eyes of Water by Alison Littlewood, the latest publication from Spectral Press. As with all the other publications from Spectral, this is a classy piece of writing. Subtle and understated, it delivers its horrors slowly and atmospherically. 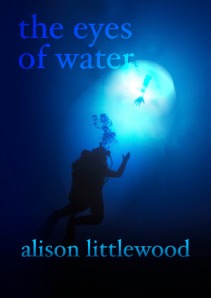 Set in the Yucatan Peninsula in Mexico, it tells of traveller Alex who and his old friend Rick - a diver who has been exploring the cenotes, flooded underground caves. When Rick's body is found with horrific - though somewhat inexplicable - injuries, Alex is called on to identify the remains by Rick's sister, an act which leads him to explore the circumstances surrounding his friend's death.
This exploration leads Alex into the flooded caves himself where he discovers... Well, that would be giving away too much, suffice to say that, like Joe and Me, a decision has to be made at the end of this story too which will have profound consequences...
The Eyes of Water is beautifully written, evoking a wonderful sense of atmosphere and creating well drawn characters. It's another quality production from Spectral and more than maintains the high standard already achieved.
Next up for Spectral is What Gets Left Behind by Mark West, pretty much a cast-iron guarantee that those standards are going to be maintained prospectively.
Can't wait.
Posted by Anthony Watson at 10:53 No comments: 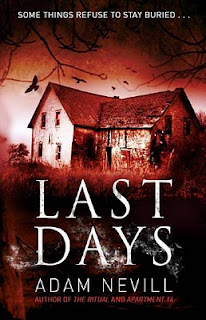 My first experience of Adam Nevill's writing was his excellent short story Little Mag's Barrow which opened the very good collection of stories in Gray Friar Press's Terror Tales of the Lake District. Shortly after I read What God Hath Wrought in Conrad Williams' collection Gutshot - a brilliant story that channeled the spirit of Cormac McCarthy's Blood Meridien. Having been mightily impressed by both, I was eager to read Adam's novels Apartment 16 and The Ritual and was equally as impressed with these two longer works. The latter is possibly the most unrelentingly tense book I've ever read, a true "unputdownable" novel.
Adam is a wonderful writer, creating tension and imagery that is truly terrifying. His books are cinematic, reading one is the closest you'll come to watching a film in terms of your emotional responses. This is in no way damning with faint praise. It could be argued that it's easier for a film-maker to scare you than a writer, haing so many more "tools" available to them so for a writer to achieve the same takes real skill, creating imagery and working on the reader's imagination to instill fear rather than presenting it to them "on a plate" with added sound effects, crashing chords etc. Adam Nevill does this, in spades-ful. It's fitting therefore that Last Days concerns the making of a film. In this case a documentary about a mysterious cult, The Temple of the Last Days, led by the infamous Sister Katherine which (as the back cover blurb puts it) "reached its bloody endgame in the Arizona desert".
The novel charts the making of the documentary and it's a clever device, cleverly used. The reader discovers more and more about the cult at the same time as the novel's protagonist Kyle Freeman does through the course of the interviews he records with the cult's surviving members.
There are some nice references to Adam's earlier novels - Kyle has made a documentary about the events descibed in The Ritual and the book shares some locations with Apartment 16 (and some imagery, particularly in a painting that may, or may not hold the key to unlocking some of the mysteries of the cult).
I really liked Last Days. The film-making device works really well in telling the story, the characters are totally believable and, most importantly of all, it's scary as hell. There's a passage where Kyle is reviewing the recordings he's made after the first interview that is brilliant - tense, scary and utterly terrifying. I had to put the book down after I'd read it, it's that effective.
The tension is maintained throughout the whole novel and Adam has created some truly scary monsters in the "Blood Friends". As for the ending, I didn't think it worked when I first read it but having thought about it in retrospect I've changed my opinion - it's exactly what would have happened, is entirely in character. I can see it being a talking point though.
It's a great book, thoroughly recommended.
Posted by Anthony Watson at 10:43 No comments: