The Devil's Brew - a few words with Benedict J Jones. 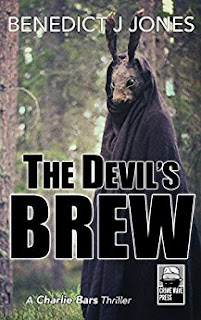 Me and Ben Jones go way back. Well, a dozen or so years at least, having first encountered each other on a now defunct horror writers forum. In that time we’ve both battled our way through the world of small press publishing, trying our best to get the stories in our heads out onto paper and into the hands of discerning readers.
I’ve strayed from the path a little bit, dabbling in reviews and publishing but the latter gave me the chance to work with Ben on his novella Slaughter Beach which very successfully launched the Dark Minds novella series and his collection of weird westerns, Ride the Dark Country. That collection was a joy to work on, westerns being a particular favourite of my own choices of reading material and our work together on it ultimately led to us creating the Dark Frontiers series featuring weird western novellas. Volume 1 is out there and work has already started on Volume 2.
As well as horror and westerns, Ben can knock out a brilliant war story and also writes a great deal of crime fiction, much of it featuring his character Charlie Bars. Charlie has already appeared in a number of short stories, the novella Skewered and a novel, Pennies for Charon. Tomorrow sees the release of the second Charlie Bars novel, The Devil’s Brew (published by Crimewave Press) which – much to my delight, transplants Charlie from his home in London to mine, the wilds of Northumberland. To celebrate the release, I thought I’d ask Ben a few questions about the book and the writing process itself:

For anyone who has yet to experience Charlie Bars, tell us a little bit about the character, where he comes from, how he came to be where he is…
Charlie Bars is an ex-con with three strikes to his name from south-east London. After the last stretch inside he swore to go straight (well as straight as he can…) and tried to make a living with his art. Failing that he ended up working in his uncle’s kebab shop where he hooked up with private detective Mazza Toshak. The two became partners after the events in my novella “Skewered” and from there they ended up in a heap of trouble in the occult-tinged “Pennies for Charon”. “The Devil’s Brew” is, in part, the mental fallout from the earlier stories and the toll it has taken on Charlie. When I first started writing the stories I wanted to stick as close to reality as I could (in some of it anyway…) and with that I wanted to depict the real damage, both mental and physical, that comes from violence.
I like to think that deep down Charlie is a decent man; he has done bad things but when stacked against some of the people he comes up against his shades of grey are just that little bit lighter. He really isn’t a hero by any means but when it gets down to brass tacks he can normally be relied on to do the right thing – however contrary that may be to the law.

Previous stories have all been set in London with the city almost becoming a character itself. Were you worried about taking Charlie out of the city?
I’d be a liar if I said that it didn’t worry me. Charlie is a hugely a product of his environment, from his speech and outlook to the ways in which he acts. To take him away from the backdrop which had always been a big part of all the previous stories, another character if you will, was a big jump to make. But I found that the countryside became every bit as much of a character as the city.
It was actually really useful to put Charlie in a position away from his geographical comfort zone. In London he has a support network of sorts whereas out there he doesn’t have that. It made me, and Charlie, ask some serious questions and I hope it helped the readers to connect with him in a different way.

I know you enjoy a good western – and have written a few yourself. I think Devil’s Brew is a western, albeit one set in Northumberland, would you agree?
At its heart, yes. One of my favourite non-western westerns is “Cop Land” and I think there are some shades of that towards the end, which I hadn’t even thought of until you asked that. The elements are all there for a western if you changed the setting and gave Charlie a big hat. That isolation that you get in a lot of westerns, the lone lawman miles from help, was something that I actively sought out. I considered a few different settings but Northumberland just fitted so well. From chats that we have had before I remembered you describing the remoteness out there and as soon as I started in on it I knew it was the right place.

Pagan rituals and folk horror have a big part to play in the novel. Was that an area you were interested in already? Did you do much research?
Yes, the initial spark of an idea came from reading about a series of horse mutilations out in Dorset a few years back and it got me thinking what kind of person could do that to an animal – and why. I’m a huge fan of rural noir and folk horror and that all started to feed into the story once I got going.
I sat down and re-watched a number of films as I was working on the book; “The Wicker Man”, “Straw Dogs”, and several others. As well I re-read Robert Westall’s “Yaxley’s Cat” which I first read two and a half decades ago and has always stuck with me. I think that was where the bill hooks came from and the cat…

I love the research part of writing – I’m guessing you do too..?
I do! I find it easy to get so lost in the research that I forget to actually write the story and end up going down all sorts of strange pathways. History is absolutely fascinating to me and the more of it I look into the more I find I want to know. At the moment I’m lost in researching the later Holy Roman Empire for a story that will end up being about six thousand words… But one of the things I like the most about researching stories is that I normally end up with a load of other ideas from things that I stumble across.

Do you prefer to have a whole story mapped out in advance or is it a case of just start writing and see where it takes you?
On the whole I don’t have it all mapped out. I tend to have a few scenes in mind, perhaps an idea for the ending and the beginning, but a lot of the fun for me is getting from point A to point Z; what comes in between tends to be new to me as it hits the page.
The problem with this method is that I can get bogged down in between… I might get ten thousand words done and then not know how to bridge it towards the end. It is all a learning curve really but I could never imagine myself plotting a novel out to every last detail before I started on it – that would feel too much like work…

Does the muse constantly whisper in your ear or is there a time when you’re not thinking of stories?
I’m always thinking of stories but writing them is another thing. I do like to have a bank of story ideas that I dip in and out of. There have been whispered ideas that have stewed in my brain and in some cases on paper for years before I actually write them in a way I am happy with.
In a lot of ways when the stories first come to me that is just for me when I walk along and think “what if…” Then I tell it to myself, research it a bit, retell it and then think about writing it down, then if it has legs I might actually write it properly.

Looking to the future, what can we expect from Charlie Bars and from yourself?
From Charlie there is a “long-short” that I’m hoping to see released and I’ve recently finished the third novel which is tentatively entitled “The Gingerbread Houses”. There’s also a half dozen shorts with him I really should finish with topics ranging from Rwandan war criminals to lost dogs to flashers to Nazi gold. I’ve also been thinking a couple of the supporting characters might deserve their own shorts (although Mrs Shandy already got one!).
Apart from that I am working on a pair of world war two era horror tales that might make it to novel length. One set in Paris and the other in the Indian Ocean.
As well as that I’m looking forward to putting out another volume of Dark Frontiers because I do love a horror western! 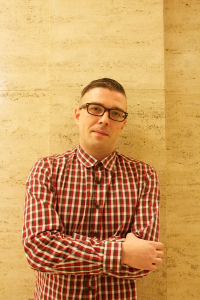 I was lucky enough to read an advance copy of The Devil’s Brew and can confirm it’s another hard-hitting thriller, with some action set-pieces definitely not for the faint-hearted and a significant nod towards the supernatural. Imagine if you can Get Carter meets The Wicker Man and you’ll have some idea of what to expect.

You can buy Devil’s Brew here.
Posted by Anthony Watson at 09:47