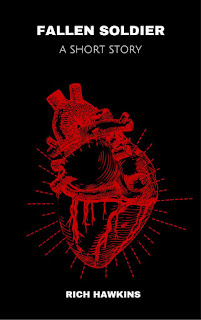 Fallen Soldier is a new short story by Rich Hawkins and is published by… himself. Yes indeed, Rich has taken the plunge and gone and done the whole thing himself, no doubt incurring the wrath of all those who see self-publishing as the eighth deadly sin.


There is still a stigma attached to self-publishing, presumably as a result of the misguided opinion that an author will take this route because their work isn’t good enough to be accepted by “real” publishers. Bollocks, frankly. It’s interesting to compare the attitudes towards self-publishing between the music and writing industries. In the former, there’s a degree of kudos given to musicians who start off on their own, posting videos they’ve made themselves online, building up a fanbase before “making it big”. If you’re a writer doing the same thing the immediate assumption is often the one I opened this paragraph with.


Bottom line: What’s wrong with an author taking charge of all aspects of their own work?


Anyway, I digress. What about Fallen Soldier?


It’s great. I’ve expressed the opinion before that the novella is the perfect length for horror fiction, a view I stand by, but second in line has to be the short story. It’ll take you about twenty minutes to read Fallen Soldier but in that time you’ll experience ghosts, zombies and demonic troglodytes all tied up in a tightly paced narrative. There’s nothing worse than a short story that outstays its welcome but that most certainly isn’t the case here in this tale of the return of a soldier from the trenches of the Great War to find that the horrors he experienced there are nothing compared to those which await him on his arrival home.


The single short story format is making somewhat of a resurgence and it’s an absolute strength and positive of e-publishing that it makes this a readily available option. That said, great things are being done by small presses releasing chapbooks too. It’s a trend I’m extremely happy to see emerging, already this year I’ve relished two stories from Philip Fracassi (Mother and Altar) and one from Scott Nicolay (Noctuidae) which have been released as “singles”. Fallen Soldier – I’m very happy to say – has joined their ranks.


You should buy Fallen Soldier, you won’t find much better value for money for 99p. If you haven’t read Rich’s work before then it’s a great introduction, if you have then you’ll enjoy again his trademark mixture of visceral horror and thoughtful characterisation.


You can get it here.
Posted by Anthony Watson at 09:53 No comments: