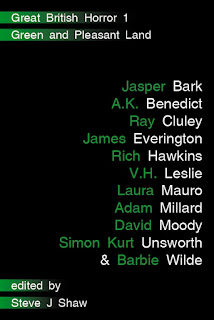 
Green and Pleasant Land is a book I enjoyed a lot. The emphasis is on subtle, supernatural horror and the traditions and superstitions of the British Isles are all well represented here. The next volume will be dedicated to urban horror and I look forward to seeing which authors are chosen and what they come up with.
Posted by Anthony Watson at 09:20