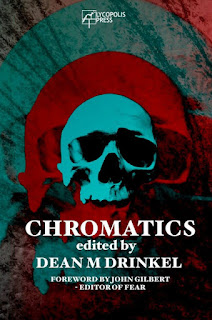 Chromatics is a new anthology from Lycopolis Press and is edited by Dean M Drinkel. It contains eleven stories based on the theme of colour – an original concept for a collection of horror stories. It has to be said that the theme is tangential at best in some of the stories but that doesn’t distract from what I found to be a strong collection overall.


The book opens with Anthony Cowin’s The Sand Was Made of Mountains – an elegant piece of prose writing which features a creature called The Catcher in the Sand – drawing immediate comparison with a certain book by J D Salinger. One interpretation of that famous book is that it’s about war and that’s certainly the case with Anthony’s story, featuring a protagonist who is a refugee fleeing from Syria. Topical then, and – in lesser hands – potentially exploitative but that’s absolutely not the case here with the resulting story a subtle, elegiac rumination on the horrors that arise from conflict.


Paul M Feeney uses the disaster at the Chernobyl nuclear processing plant as the backdrop for his story The Black God. I have to admit to more than a passing interest in the subject (and can heartily recommend Piers Paul Read’s account of the disaster Ablaze) and have a distinct memory of a TV documentary filmed in the abandoned city of Pripyat. Scenes of the deserted streets were eerie enough – a true post-apocalyptic vision – but really disturbing was the shot of a mysterious figure spotted by the camera crew high up in the window of an abandoned skyscraper. It’s an image that’s remained with me for over twenty years, and one which still gives me shivers and I have to say that I got the same feelings when reading Paul’s story. He creates a wonderful atmosphere here, building a sense of paranoia which goes beyond that of just strangers in a strange land which culminates in something truly dark.


Beige is not the colour of blandness but madness in the story by Martin Roberts. A first person narration from a suitably unreliable narrator leads along the path of delusion towards a tragic revelation. Raven Dane’s The White Room centres around strange goings-on around an abandoned, decaying mansion in a generation-spanning period piece. Those goings-on are explained but I felt the story was possibly too short to contain the ideas within, making it feel like an extract from a longer work.


I loved the concept behind Restoring Scarlet by Dave Jeffrey which gives us a mortician with some very special skills at restoration. It’s another first person narrative which is cleverly constructed so that the readers’ sympathies change over the course of the story, continuously wrong-footing them and leading them towards a chilling conclusion. I loved it.


Xanthos by Wayne Goodchild is probably a little too burdened-under by references to the mythology created by Robert Chambers’ The King in Yellow to stand on its own two feet and would have worked better in an anthology dedicated to the author. That said, it’s the second time Dean has published this story of a playwright with a fear of the colour yellow so who am I to argue..?


Born From the Greens is the first published story by Zak A Ferguson. There’s plenty enough in this story of something monstrous growing in the garden but there’s a little (understandable) naivete to the writing, occasionally pathos becomes bathos and some of the more flowery passages could have done with a little pruning. With all my gardening metaphors used up now what I  can say is that there’s plenty imagination on show here and, with a little technical refinement great things could lie ahead for Zak.


The Spiritual Room by Christopher Beck gave me a few problems. Its subject matter – childhood abuse – is a really tricky one to pull off successfully (by which I mean not in an exploitative way). I really don’t think the author succeeded in this respect, pitching the tone of the story way off. Subtlety and discretion would be more effective – neither of which are on display here.


This is the Colour of Blood by Mark West gives us another outing for his recurring character Mike Decker. It’s an entertaining romp involving Russian gangsters and secret rituals but I don’t think it’s Mark’s best work. I’m still not entirely sure why Decker is involved in the case in the first place other than as a device to move the plot forward – my feeling is that Mark had the conclusion in his head first and then worked backwards to find a way of getting to it.


Anthropocene is by Charles Rudkin and provides an allegorical tale with post-apocalyptic imagery in which colour has disappeared from the earth. The sighting of a dragon in Antarctica may herald a return to some kind of normality. It’s an intriguing story, full of interesting images and allusive dialogue. It’s thoughtful and thought-provoking but suffers a little from being divided up into headed sections.


The collection heads off into the sunset (somewhat appropriately) with Dean M Drinkel’s Dans le Rouge du Couchant. Well now, this was unexpected. Unexpected in that this is a horror anthology and, although there’s darkness creeping around this story like mist on the surface of the Seine, it’s not truly a horror story. It is an excellent story though – a dark love story set in Paris which perfectly captures the paranoia and concerns that accompany any new relationship. (Oh, and the romance of course). There’s a growing sense of dread which develops as the story progresses and the conclusion, although not entirely unexpected, is hard-hitting. I’m not sure why Dean included it in this particular book – but I’m glad he did.


All in all then a strong collection of stories. A couple of stumbles along the way but containing at least four stories which are worth the admission price on their own.


You can buy Chromatics here.
Posted by Anthony Watson at 11:29 No comments: 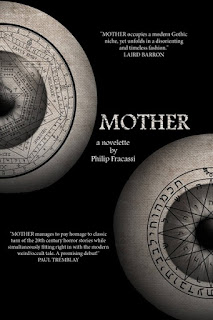 Posted by Anthony Watson at 12:02 No comments: