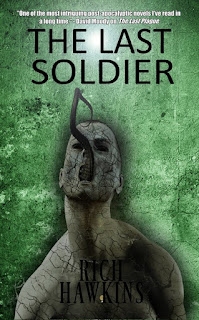 The Last Soldier is the new novel from Rich Hawkins and is the final book in the Last Plague trilogy published by Crowded Quarantine Publications. The first two books in the series were outstanding with the The Last Plague followed up by the smaller scale, more introspective but vastly darker The Last Outpost and that incredibly high standard is more than maintained in this, the conclusion. The Last Soldier is proof indeed that all good things must come to an end.
It’s set a year after the events of The Last Outpost which described the aftermath of the outbreak of the titular plague whose victims transformed into Lovecraftian monstrosities, consumed by the desire for human flesh. That book ended with a journey from Britain to Scandinavia, the location of the fabled outpost. In contrast, The Last Soldier begins with a return to British shores, the journey taken by Morse – the soldier of the title, a man who has seen active duty in Northern Ireland – and Florence, a young girl who may, or may not be, the key to a fightback against the hordes of infected and the Plague Gods, huge cosmic horrors circling in the skies above the ravaged landscape.
The Britain they return to is changed completely from pre-plague times with uninfected humans now absolutely in the minority and a sense of some kind of evolution of the infected into bigger, even more deadly manifestations. There’s also evidence of interaction between humans and the infected, exemplified in a particularly chilling set-piece involving a pit and which provides further evidence that hell hath no fury like a woman scorned.
Given that the story is set in a bleak, post-apocalyptic word it’s natural that Rich should choose to set most of the action in my home county of Northumberland. Some of the place names he uses will raise a smile amongst those familiar with indie press horror but I was pleased to see that he obviously like the name of a real place – Black Heddon – as much as I do, using it for a key scene.
So, given this is the culmination of the series, the big question is – does the ending work? Is it worthy of the exemplary ground work that has preceded it? Is it a fitting conclusion?
Absolutely.
No spoilers here but honestly, the way this epic story ends, and in particular the way in which Rich chooses to handle it, is perfect. It works with all that has gone before and is eminently satisfying.


I enjoyed the hell out of The Last Soldier – as I did the first two books of the series – and can’t recommend it highly enough. Rich has created a truly spectacular, and entirely plausible and brilliantly realised, post—apocalyptic vision here. The characters he has placed within his world are real and believable and perfect vehicles for the theme of humanity which runs throughout the series. By choosing to tell an epic, world-altering story through the filter of individual experiences is a technique that has worked brilliantly throughout, no more so than in this final instalment. The trilogy may be complete now but it’s a world that deserves revisiting, something I sincerely hope he finds time for.
Posted by Anthony Watson at 10:08 No comments: