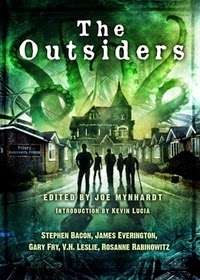 The Outsiders is the latest publication from Joe Mynhardt's Crystal Lake Publishing and is a collection of five Lovecraft inspired stories written by five different authors set in a fictional gated community called Priory. Priory - and the characters inhabiting it - provides a framing device for the stories but the tales are linked even more closely with the narratives cross-referencing each other, the events of one mentioned in another, characters providing the major narrative thrust in some having cameo roles in others. It's a clever device and one which works extremely well, pulling the five stories together, providing a cohesive whole which is greater than the sum of its parts.
Mind you, the individual parts are pretty good too - the stories work extremely well in isolation but the linking device is a definite enhancement.
The collection opens with The Subprime from Gary Fry (which seems only appropriate - he's doing as much as anyone currently to expand the mythos and create a body of work which provides his own, very distinctive take on it). The story provides an introduction to Priory and its residents, in particular Mr Phillips (Harvey - not Howard) and the enigmatic Charles Erich (whose name will raise a smile for all those students of Proto-Norse linguistics), the community's founder. Phillips is a financier, the respectable face of tyranny as it were and the plot revolves around a crisis of conscience for one of his employees - Lee - who has decided that sacrificing his soul on the altar of capitalism is not for him and decides to tender his resignation. In an attempt to change the young man's mind, Phillips invites him to a dinner party at Priory where it turns out that some sacrifices are actually easier to make than others.
James Everington provides the next story, Impossible Colours which takes the bold step of tackling the subject of Lovecraft's perceived racism. As might be expected from the author, it's done in a subtle, tangential way and very effectively so that the message in no way diminishes the impact, and enjoyment of the story.
Stolen From the Sea is by Stephen Bacon and uses the tragedy of the loss of a child to bring about an awakening in the father as to the true nature of the cult to which he and his wife belong. The cult that is the connecting force within Priory, binding all its residents together. There are few better writers than Stephen at approaching sensitive, sad issues like this (you should read Husks in the Murmurations anthology if further proof is needed) but this is just a starting point for a tense and dramatic escape story.
V H Leslie provides Precious Things, an examination of the deteriorating relationship between two elderly residents of Priory which showcases her trademark skills at story construction and clever wordplay.
The final story is Rosanne Rabinowitz's Meat, Motion and Light which - like James Everington's story - takes the racism issue as its starting point, the story's protagonist a black woman returning to Priory after having escaped its clutches. (Those clutches being undoubtedly tentacular). The old adage of "you can never go home" of course holds true here and things - as might be expected - go horribly wrong. I could be mistaken, but this could be the first story ever to feature a Great Old Ones sex scene. Spectacular love craft indeed.
The Outsiders is a very good book. Five strong stories which provide an excellent homage to Lovecraft and the mythology which is his legacy. Strong enough individually, the stories combine to create something truly special. It's a book I recommend highly and you can buy it here. 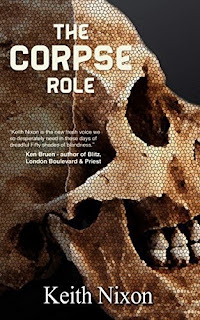 There was a view, not so long ago, that sales of horror fiction were in decline because many of the tropes the genre employed were being nicked by crime writers - mainstream, best-selling writers at that. That may have been a simplistic explanation but there's certainly an element of truth buried within it. Violent, gory death and psychologically damaged serial killers have become a mainstay of the slightly more "respectable" genre. To be honest, I don't think it's that much of a problem, there's enough room for both genres to flourish and, in a way, it's a good thing for horror to move on, find new themes and tropes to unsettle readers. It's a fine line, I guess, between the two genres and there are many excellent examples of cross-over between the two. Most notable are the Charlie Parker novels from John Connolly but I'll also chuck in a couple of personal favourites, Reaping the Dark by Garry McMahon and Ben Jones' Pennies for Charon as further evidence.
All of which - possibly unnecessary - preamble is by way of introducing a review of a crime novel on a horror review site, namely The Corpse Role by Keith Nixon.
As the title may suggest, mortal remains have a large part to play in the narrative and, indeed, the story begins with the unearthing of a body from a shallow grave. The body turns out to be that of a security guard implicated in an armoured van heist two years previously. A business card from a former policeman, turned private investigator is found in his wallet and so begins a briskly paced, twisting tale of murder, corruption and shock revelations.
The story is told in two timelines - the present involving the ongoing investigation led by DI Charlotte Granger and another (with the chapters titled "the past") which turns out to be the events leading up to the heist. It's a clever technique and one which is executed perfectly. The "past" sections are written in first person, present tense - a device which has the reader constantly questioning who it is that's actually narrating and what, if any, connection they have to the present day investigation.
There's a lot going on in The Corpse Role, and a lot of characters to keep up with. This, along with the double timeframe device, could have easily gotten out of control but it's testament to the author's skill that he marshals everything effortlessly, keeping the plot banging along at a cracking pace and, most importantly, keeping the reader alongside him.
The characters are all well drawn (my favourite a crime boss with a novel way of fertilising his garden) with plenty of realistic dialogue (particularly of the awkward kind between people whose relationship isn't quite what it used to be) which enhance the narrative without distracting from it, or holding it back.
There are twists and turns all the way, and a lovely feeling of things falling into place as the narrative progresses but the biggest revelation is kept to the very end. It's a gamble, using such a dramatic device and the book as a whole hangs on whether it works or not.
It works.
I very much enjoyed The Corpse Role, imaginative, clever and with a no-nonsense writing style it's a book I recommend very much. You can buy it here.

Posted by Anthony Watson at 10:44 No comments: