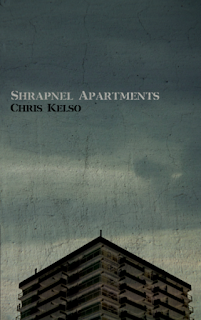 Shrapnel Apartments is the new novel from Chris Kelso and is published by Crowded QuarantinePublications. It’s a follow-up to Unger House Radicals which I reviewed here and which was one of my favourite reads of last year.
Unger House Radicals dealt with the creation of a new art-form, Ultra-Realism, by film student Vincent Bittaker and serial killer Brandon Swarthy – whose relationship I likened to that of Rimbaud and Verlane. In possibly the most contrived pun I’ve ever managed (which is saying something) if UHR is Rimbaud: First Blood, (there’s certainly plenty of the red stuff spilled in its pages), then Shrapnel Apartments can surely be regarded as Rimbaud: First Blood Part II.
There’s a marked slump in quality between the two films but not, I’m very pleased to say, between the books. Whereas John Rambo appears in both films, undergoing an amazing transformation from traumatised, disillusioned veteran to some kind of invincible superhero, Bittaker and Swarthy barely get a look in – although they are referenced occasionally – Shrapnel Apartments is set in a post-Ultra-Realism world, a world in which the radical has become part of the establishment.
As with Unger House Radicals, the book is written in a scattershot style, from the perspectives of multiple characters. There’s perhaps more of a narrative thrust to this one though (or perhaps thrusts – there’s more than one story to be told here) and even a hint of (possibly) cosmic horror with the introduction of a supernatural element to the proceedings in the form of the mysterious entity known as Blackcap and his assistant King Misery – first alluded to in an opening sequence set in the Democratic Republic of Congo. There’s suggestions throughout the book that Blackcap is guiding events, toying with humanity to achieve his own, nefarious ends.
The storylines running throughout Shrapnel Apartments include those of child-killer Beau Carson and his investigation by corrupt cop Bobby Reilly, a spat between critics Gottleib and Mancuso (primarily about Ultra-Realism) and the eternal suffering of Florence Coffey. The individual stories are told in a variety of narrative voices, mainly first person testimonies (although it’s often not clear exactly who it is who’s speaking…) interspersed with third person sections, police records, random soliloquys and – significantly – autopsy reports. It’s a dazzling display of technique, the seemingly random sections bombarding the reader with images and ideas yet undergoing some kind of synergy to create a whole far greater than the sum of its parts which will leave you breathless in its audacity.
Whilst Unger House Radicals was all about art, it’s a bit more difficult to pin down a single theme for Shrapnel Apartments although I’ll stick my neck out and boldly suggest it might be about the nature of evil itself. The titular apartments are (actually, may or may not be) the location of a reality TV show – a la Big Brother – so there’s evidence of evil right there and, given the references to Jazz music (which everyone knows is the work of the devil) which appear in the book I’m relatively confident in this assumption.


Not that it matters. What any reader takes from any book is absolutely an individual experience. What I took from Shrapnel Apartments was an admiration for a writer willing to try new things, be experimental and doing so brilliantly. This is yet another assault on the senses from Chris Kelso and I thank him for it. There’s great skill on display creating the distinct and individual voices of the characters but also in corralling all the disparate elements into a thought-provoking, dazzling and thoroughly satisfying whole.
Posted by Anthony Watson at 10:33