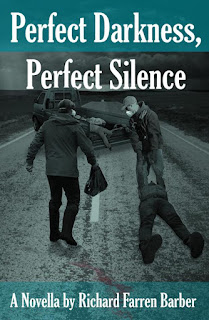 Given the current political climate, there’s a very strong possibility that the whole sub-genre of Post-Apocalyptic fiction could be lost to use, re-packaged as contemporary drama so it’s probably a good idea to make the most of it while it’s still here.
Such an opportunity is provided with a new novella in the Hersham Horror line (which launched very successfully last year with these titles) from Richard Farren Barber – Perfect Darkness, Perfect Silence (a title which may, or may not, reference a James Lovegrove story – but which I kinda hope does because of the context).
The apocalypse in this book is not the result of handing the nuclear codes to a man with the reasoning capacity and awareness of a spoilt toddler - this is a work of fiction - but of an infection, a plague, which wipes out the majority of the world’s population, leaving only scattered communities of survivors. A familiar trope for sure, but those anticipating the arrival of hordes of zombies will be disappointed for in this scenario the “infected” are still very much alive, a threat simply because of the risk of infection they (literally) carry. Once dead, they remain dead – a situation which brings with it many practical implications for the survivors…
It’s the disposal of the corpses which is the job of Hannah, the protagonist – and narrator – of Perfect Darkness, Perfect Silence. Along with her team, she retrieves the fallen bodies of those who have made it as far as the outskirts of the village in which she and the other survivors now reside, in order to remove them and with them the risk of further contamination.
It’s the epitome of “it’s a dirty job but someone’s got to do it” and there’s much grimness to be had in the descriptions of what the team have to do. There’s much opportunity for character development too, with the personalities of the team emerging from the ways in which they approach their grim task.
The community is led by the charismatic Dr Andrew Hickman who has shaped the rules and policies by which the village is kept safe behind its walls and quarantine zones and it’s these which provide the subtext to the novella. The political allegory of Perfect Darkness, Perfect Silence is writ large, the paranoia and exclusion of the survivors towards the infected (and – crucially – the “possibly” infected) holds a mirror up to the current political climate here in the UK and other countries which, frankly, should know better.
In this context, Perfect darkness, Perfect Silence is incredibly powerful. The last act (the final solution) performed by Hannah and her crew is to tip the dead into huge funeral pyres – scenes which cannot fail to evoke images of much darker times, and a salutary reminder of the real cost of extreme ideologies.
I was mightily impressed by this novella and regard it as the best that Richard has written thus far. Despite the “heavy” politics it still works as an exciting read with fully drawn characters and a great deal of imagination on display. It’s a cleverly constructed world Richard has created here and his use of Hannah as a protagonist gradually discovering – or uncovering – exactly what is happening is something he handles expertly.


I highly recommend Perfect Darkness, Perfect Silence. It will be launched, alongside the other new novellas in the series, at FantasyCon in September.
Posted by Anthony Watson at 10:41