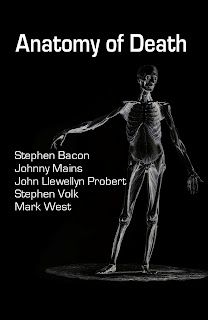 Anatomy of Death is the third in the line of Pentanths (collections of five themed stories) produced by Hersham Horror. It’s edited this time round by Mark West, someone whose work as an author I’ve enjoyed very much in the past. His writing has always struck me as subtle and understated with a strong emotional core – quiet horror if you like, so it was a bit of a surprise to see that the theme for this collection was the sleazy, pulpy fiction that was so prevalent in the seventies when horror was going through its equivalent of the punk movement. Indeed, the subtitle for this collection is Five Sleazy Pieces (which, if made into a film would probably also star Jack Nicholson).
Given the subject matter of the book it was another surprise to see that the first offering was from Stephen Bacon, another writer whose work I admire for its subtlety and emotional impact. Pseudonym is a first person account of a journalist’s interview with Gilbert Hudson, an author whose heyday was in the seventies writing the sort of lurid pulp novels that provided the inspiration for this collection. It’s a clever way to start the anthology, providing as it does a brief history of the horror genre and how writing styles – and readers’ tastes – have changed, including a nice little dig at the Twilight saga and it’s hideous (if sparkly), teenager-friendly offspring.
It’s a slow build of a story that uncovers the secrets Gilbert Hudson has been living with for most of his life (and which led to his adoption of a pseudonym), secrets involving an incident that’s bizarre enough to earn its place in any respectable pulp fiction… The denoument is suitably gross and creepy too and Pseudonym is a cracking start to the collection.
Don’t let the title of Jonny Mains’ story fool you. The Cannibal Whores of Effingham is in fact a searing socio-political satire, a scathing indictment of the ravages of capitalism and an allegory for the global economic collapse.
Actually, it’s not…
The title kind of gives it away really, and you pretty much get what you might expect. The plot, such as it is, revolves around the eponymous characters biting off more than they can chew when their next victim turns out to be even more deranged and psychopathic than they are. It’s basically just an excuse to throw in as many “shocking” scenes as possible although the impact is lessened by repetition and the fact that none of the characters involved are in the least bit likeable. It’s an exercise in exploitation, and succeeds admirably in this, just don’t expect intense characterisation and thought-provoking plotting.
John Llewellyn Probert’s Out of Fashion is the shortest story in the collection and calms things down a bit after the excesses of the previous tale. It’s another first person narrative and is set in Victorian London. There’s not so much sleaze but plenty of anatomy with John cleverly merging his medical knowledge into the unfolding narrative. The use of first person is interesting given the conclusion of the story but it’s an entertaining short that gives a whole new meaning to the phrases “Clothes maketh the man” and “fashion victim”.
Arse-Licker is by Stephen Volk and is a story that not so much pushes the envelope as tears it open and tips its contents out. Much like Jonny Mains’ offering, the title pretty much encapsulates what the story is all about but it’s to Stephen’s absolute credit, and skill as a writer that the gloriously gross content is transformed into an amazing piece of fiction.
The key scene, in which metaphorical becomes literal, is absolutely horrible. In a good way. It’s a long scene and will have you wanting it to come to an end long before it actually does, but it’s written with such brilliant dark humour that when a moment of epiphany (or should that be epi-fanny?) is reached it will have you laughing out loud. It’s a hard trick to pull off but Stephen does it brilliantly, there isn’t a bum note in there.
Darkly comic, this is certainly the most memorable story in the collection. Lurid? Yes. Sleazy? Yes. Tongue-in-cheek? Most definitely.
Mark’s own story The Glamour Girl Murders completes the collection and is probably comes closest to capturing the spirit of the original stories. It’s set amongst the world of “glamour” photography and porn and takes place in a seventies London which Mark captures perfectly with some lovely period detail.
It’s a murder mystery as the title suggests and fulfils nicely all the pulp traditions with a suitably monstrous killer and a climax (yes, I chose that word specifically) set in a thunderstorm. Oh, and a shady character called McMahon…
Anatomy of Death is fine addition to the Hersham back catalogue. Horror is indeed a broad church as Mark says in his introduction. Tastes may change, the genre will evolve (as it has to) but at the end of the day you can’t beat a bit of pulp.
You can buy the book here.
Posted by Anthony Watson at 18:12