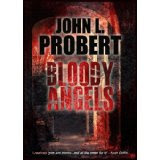 Bloody Angels is the second Parva Corcoran mystery by John Llewellyn Probert, featuring the CID coroner whose first outing was in the thoroughly entertaining Ward 19. This is a slightly longer story and allows John to incorporate even more extremely nasty murders - this time centred around a religious theme - into the plot which twists and turns towards its conclusion.
The murders are horrific but this is more mainstream crime fiction than horror and comes complete with the requisite line up of potential villains and red herrings in abundance, and it's to John's credit, and testament to his skills as a writer, that he manages to pack quite so much plot and character into a relatively short piece.
It may be due to my own lapsed catholicism but I do love stories that use a religious theme so it was a real pleasure to read Bloody Angels - but then it's always a pleasure to read John's stuff, his enthusiasm leaps off the page at you. This is a good book.
The denoument is suitably surprising and entertainingly complex - but eminently satisfying, making sense of all that has gone before. There are more hints too at Parva's past and the events which have formed her character - hopefully these will be expanded on in future storylines. God knows what John has in store for the residents of Bristol next (although after this offering I'm not sure God will want anything to do with him...) but I can't wait to find out.
Bloody Angels is bloody good and you can buy it (in e-format) here. Be a sin not to really.
Posted by Anthony Watson at 13:24