Tales of The Weak & The Wounded. 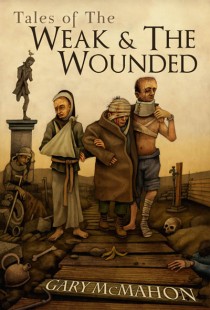 Tales of The Weak & The Wounded is the latest collection of stories from Gary McMahon and is published by Dark Regions Press. I ordered the signed hardback edition and I have to say it's a thing of beauty. If I needed more evidence that "real" books are superior to electronic versions then this is it, it's a beautifully produced book (with proper bookmark and everything..!) and just holding it, having it to keep forever on display, in my opinion add to the experience of reading the stories. Comparing a real book to an e-reader is like actually standing in a beautiful place as compared to looking at a photograph of it. (It has to be said, mind you, that I can get excited over a new pen so maybe my thoughts on the matter aren't that significant...)
The stories are bound together by a framing device of being cases studies discovered in the Daleside Institute, a now-derelict mental asylum in Northumberland which will be familiar to anyone who's read Gary's earlier novella Rough Cut. The prologue introduces John Shayne, presenter of the TV show All I Ever Haunted who discovers the case histories as part of his research into using the Daleside for a forthcoming episode of the show. (And allows the author to direct some well deserved digs at Most Haunted - a show that has set back the cause of parapsychology decades with its descent into pantomime).
It's fitting that the first story in a book which will guide the reader through some very dark places concerns a book that guides the story's protagonists to some very dark places... Guidance is a strong start to the collection, tapping into some of the fears about being lost in a strange (foreign) place.
Then comes Diving Deep, a story that begins like an episode of The X-Files, concerning the discovery of a seemingly man-made tunnel beneath the polar ice cap but then turns into something else entirely. I don't want to describe the plot and themes of the story too much but - I kid you not - this is one of the most powerful stories I've ever read. The writing is superb, particularly as the story heads towards its (profound - but in a good way!) climax. Diving Deep is the perfect title for this story - both in a literal and metaphorical sense. I had goose-bumps when I finished reading it (and not just because of the story's setting). Brilliant.
At this point I'm going to break away from giving a mini-review of individual stories (17 in all - this could be a very long post..!) but give a general overview of the collection as a whole. Suffice to say all the stories are excellent, there's no feeling of fillers being put in just to make up the word count.
A theme present in a lot of Gary's work is that there is a parallel reality to ours, a dark place full of monsters and that every now and then events - or individuals - bring about a connection between these realities. That connection might be via an MP3 download as in The Ghost of Rain' or a video film in Strange Scenes from an Unfinished Film. When the dark stuff actually gets into the real world the consequences are horrifying - Something's Coming, Those Damned Kids. The latter story incorporates another theme, the breakdown of society and, in particular its effect on young people. This theme is explored further in Teen Spirit, another cleverly titled story that manages to combine a creepy premise with social commentary - "and all their uncaring, uneducated minds can think of is to poke it with sticks..."
The last story in the collection The Nature of Things is a biting satire on that perfect example of the end of civilisation and society, reality TV.
There are proper monster stories in here too, The Leaner gives a very british slant on the classic Hollywood "teens trapped in a deserted house by a monster" trope whilst Bone Bag creates a very effective monster and at the same time mines the fear of illness and decay. Survivor Guilt is perhaps the most traditional story in the book but I loved it for its(highly effective) twist in the tail.
This is a great collection of stories and an excellent showcase for the highly talented Gary McMahon. There are enough images in here to haunt your dreams for months to come but there's also depth here, strong ideas and commentary. The best horror holds up a mirror to society, is grounded in reality and Tales of The Weak and The Wounded is an exemplar of this.
It was good to see the hummingbirds in the epilogue too...
Posted by Anthony Watson at 11:31

Email ThisBlogThis!Share to TwitterShare to FacebookShare to Pinterest
Labels: Dark Regions Press, Gary McMahon, review, Tales of The Weak and The Wounded