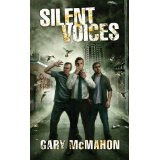 Silent Voices is the second book in the Concrete Grove Trilogy by Gary McMahon and is published by Solaris Books. Being the second part of a trilogy usually means a trip to the dark side where all the bad stuff happens, awaiting resolution in part three. (Or is that just Star Wars? Mind you, the really bad stuff didn't happen in that particular saga till long after the third instalment and George Lucas got his hands on some nifty new computers...) This is a Gary McMahon book though, so you're pretty much guaranteed very dark, very bad things happening irrespective of whether it's book one, two or three.
The story revolves around the characters of Simon, Marty and Brendan, adults now but who, as children, went missing for a weekend in the Needle, the derelict tower block at the heart of the Concrete Grove estate, emerging from it traumatised, abused and changed forever. Now, some twenty years later, they are plagued by dreams and memories of their experience and are drawn back to the Needle to face up to the evil they encountered there.
Yes, there will be the obvious comparisons to Stephen King's IT, but this novel bears those comparisons with ease. IT is possibly my favourite King novel but I can honestly say I enjoyed Silent Voices equally as much. Pennywise was great but Silent Voices has Captain Clickety - a brilliantly scary creation, the creature that haunts the three men's childhood, and present day thoughts. It's a great name for a monster, somehow mixing childhood innocence with an ominous feeling of dread. (Comparisons are probably appropriate too to Gary's earlier novella The Harm which explored the theme of childhood abuse resonating into adulthood).
The characters of the three men are brilliantly drawn and entirely believable. It's Simon (the only one to have escaped the clutches of the Grove) who drives the "reunion" but it's obvious he's simply the catalyst, fate has caught up with all three of them. All are plagued by visions and dreams (yes, the hummingbirds are back!) which makes for some pretty gruesome body-horror scenes, particularly in the case of Marty. (Think Cronenberg's Videodrome and you'll have some idea of what's in store...) It's bleak and unrelenting and, like the first book of the series, mixes ancient evil with modern day fears - and there's no one better at that than Gary McMahon.
There are big themes at play here, the Concrete Grove really is a doorway to Creation we're told (on page 20 so no spoiler!) something hinted at in the first novel and a theme which is expanded on in the book's final showdown. It may be a small book physically but it's an epic novel.
This is a great book. My dad is a twin and I live twenty minutes away from Morpeth but that didn't spoil my enjoyment of what is further evidence that Gary McMahon is a major force in the field of horror literature. (I'm aware that much of that sentence will mean nothing to you if you haven't read the book but hey...)
Silent Voices is a cracking horror story. It's also about good and evil, guilt and redemption. Most of all it's about friendship and what that really means.
Roll on book three.
Posted by Anthony Watson at 15:53