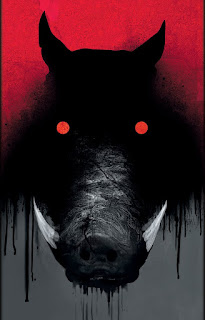 Cunning Folk is the new novel from Adam Nevill and the second published by the author’s own imprint Ritual Limited. As with all previous Ritual publications, the book itself is a thing of beauty with another stunning piece of artwork from Samuel Araya gracing the cover. The hardback edition is particularly striking, following the precedent set by 2019’s The Reddening by omitting the title and giving full exposure to a monstrous visage, in this case a terrifying boar with curved tusks and glaring, red eyes.

The book’s protagonists are Tom and Fiona who, along with daughter Gracey and dog Archie, are moving into their new home, a house they’ve bought after years of living in rented accommodation. A new start awaits them all, an escape from unscrupulous landlords and the grim existence of life as tenants…

OK, it’s clear from the start what kind of story this is going to be. Even if it weren’t for the hugely effective prologue to the book, in which the fate of the house’s previous owner is revealed, savvy readers will realise that things “probably” won’t be going to plan for the family, and that their dream of a new life will instead be a nightmare. The trope of the “moving into a new house unaware of its dark and secret past” is far from new but – I have to admit – is a particular favourite of mine, particularly if the properties are in remote, rural locations. To his credit, Adam gives a nod to this early on in the book during a game of I-Spy as the family approach the house. “Something beginning with H” elicits both “home” and “haunted house” as replies.

Sinister dwellings have of course featured in Adam’s books before, most overtly in Apartment 16, House of Small Shadows and the recently screen-adapted No One Gets Out Alive (which expands hugely on the aforementioned horrors of living in rented accommodation). The challenge then, was to see if he could come up with something new on the theme, a challenge I was fairly confident he would rise to given his recent invention of a whole new sub-genre with his amazing Derelictions.

My confidence was not misplaced. After carefully arranging all the pieces to set up readers’ expectations, Adam skilfully pulls the rug from beneath their feet and gives us something else entirely.

The house is in a state of decrepitude, something which gives Tom the opportunity to flex his DIY muscles as he learns the art of being a “home owner”. Unfortunately, despite the overwhelming sense of pride and achievement the act of laying a single piece of lino in a room brings with it (yes, I speak from personal experience), things turn darker for Tom. It soon becomes obvious that the house requires a  huge amount of work – something that will cost money the couple do not have; Tom is freelance but currently with no contracts whilst Fiona works in a bank. This introduces a tension into their relationship, a tension which is exacerbated by the introduction of the book’s other main characters, Tom and Fiona’s next door neighbours the Moots.

The Moots are wonderful creations, and it’s clear from the start that something is decidedly “off” about them. Adam has a real gift for describing the weird and such is the case here. The neighbours not only have a distinctive appearance, their behaviour is also somewhat unsettling; visitors to their property appear to interact with them in a way that suggests obeisance, as if the Moots have some power and control over them. Whilst this is strange enough, it’s their proprietorial attitude to their own property – and the land around it – that brings them into conflict with Tom.

The “that’s not how we do things around here” sentiment is one familiar to anyone moving into a new area, a manifestation of the belief that ownership and control are somehow part of the act of simply living in a place for some time. The Moots, however, take this concept to its extreme – and some of the things they do do are very strange indeed.

The book is mainly told via the viewpoint of Tom but it’s a clever move on the author’s part to describe the first of the truly bizarre set-pieces through the eyes of Gracey who has wandered into the woods behind the house. There, she comes across a clearing and witnesses a strange ritual being performed by the Moots. Through her innocent eyes, the activities on display are strange but in a funny way; to the readers’ eyes of course, they are something else entirely.

Grotesqueries are stock in trade for Adam and the manifestations within Cunning Folk are a fine addition to his monstrous menagerie. Those whose childhoods were traumatised by the TV show Pipkins will have their nightmares rekindled here and there’s  more than a passing reference to the author’s short story Pig Thing.

Conflict, inevitably, arises between the two households and, as the paranoia and tension increase, so Tom’s behaviour becomes ever more extreme. The ratcheting up of hostilities is cleverly done, a contrast being drawn between the seemingly calm and controlled Moots and the increasingly erratic Tom. The narrative raises the possibility that all this is in Tom’s head of course, something that clearly occurs to Fiona whose frustration with her husband further exacerbates the tension that is already there between them.

Whatever the driving force behind the conflict, it culminates in a scene which is possibly one of the most disturbing Adam has ever written. Which is saying something. The scene brings things to a head, and ushers in the third act of the book in which revelations abound and a whole new context is placed on events.

Cunning Folk is adapted from Adam’s own screenplay – something which is reflected in the present tense prose of the novel. (Lines like “Tom picks up the chainsaw” work in both formats). This is something which both benefits and detracts from the narrative. The need to condense the story into what would be ninety minutes on screen (or 120 if there’s a bigger budget…) means that the narrative cracks along at a fair old pace. Short chapters reflect short scenes on film. Whilst this is a positive (“it’s a literal page-turner!”) it also means that there’s some loss of tension. Both The Ritual and No One Gets Out Alive are supreme examples of the author creating – and, more importantly, sustaining – incredible amounts of tension but I felt that was lacking a little in Cunning Folk. Both those books have of course been made into films and whilst The Ritual movie managed to recreate some of the tension of the book, No One Gets Out Alive – whilst being hugely entertaining in its own right – had no chance to do the same, having reduced the original 600 plus page novel into a swift 85 minutes running time.

It could be argued that this “need for speed” sacrifices the time for character development and, indeed, it often seems that Fiona simply acts as a foil for Tom. The story really is Tom’s however, it’s his actions and reactions that drive the narrative - and Adam does have a very good track record for having strong, female lead characters in previous novels.

These are minor quibbles anyway. The characters are still well drawn enough for you to care about them and what happens to them – which makes “that” scene all the more impactful. Whilst I delighted in the longueurs of many of Adam’s previous works, immersing myself in the worlds he’d created, I really enjoyed hurtling through Cunning Folk – in fact the change in pace from previous works is testament to his versatility. And to be left wishing there had been more is no bad thing either…

Cunning Folk is, well, cunning – playing with readers ‘expectations throughout. It’s a potent blend of psychological and folk horror with a hefty dose of violence added to spice things up. The conclusion, reached via an action-packed third act, is deeply satisfying – which is a description I can apply to the book as a whole. It’s further evidence (were it needed) that Adam Nevill remains at the forefront of contemporary horror fiction. Long may that situation continue.