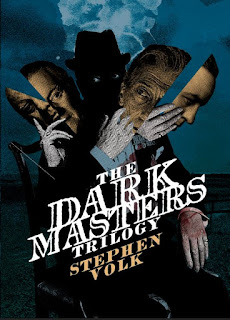 The Dark Masters Trilogy is published by PS Publishing and brings together the two previously published novellas, Whitstable and Leytonstone alongside the concluding story in the series, Netherwood. All are written by Stephen Volk, and are fictionalised accounts of episodes in the lives of notable talents in the creative arts, Peter Cushing, Alfred Hitchcock and Dennis Wheatley respectively, the books’ titles originating from the locations in which those events occur.
I’ve already reviewed both Whitstable and Leytonstone – here and here – so this review will focus mainly on Netherwood. The titular location is a boarding house in Hastings, the final residence of the Great Beast himself, the wickedest man in the world, Aleister Crowley and the place to which he summons novelist Dennis Wheatley. Although this meeting is fictional, the two men had actually met in real life some years earlier at the Hungaria Restaurant near Piccadilly Circus, and it’s this prior connection which Crowley, (and the story), exploits. Following the meeting, Wheatley based some of his characters on Crowley – thinly enough that umbrage, or even offence could be taken. Possibly enough that some kind of revenge would seem appropriate…
Perhaps the most notable achievement of the two previous novellas was the degree of characterisation they presented, offering new insights into both Cushing and Hitchcock. Such skill is even more evident in Netherwood with an equal emphasis on both Wheatley and Crowley. Whilst this is a work of fiction, it is - has to be – grounded in fact and the requisite exposition and back-story is presented here in masterful fashion. The novel opens with a scene set on a train in which Wheatley meets a young soldier and his sweetheart, the dialogue – both internal and external – providing the story of Wheatley’s military service in a way that appears seamless and natural. Anyone aspiring author, (and a few established ones), should use this trilogy as a masterclass in developing character. The information is all there but isn’t dumped on the reader, rather it’s presented as part of the natural flow of the narrative, character is revealed by action and interaction. It’s sublime stuff.
It’s a little unfortunate that Wheatley is up against Crowley here; unfortunate in that in comparison to the force of nature that is the most famous member of the Golden Dawn he comes across as a little anodyne. Crowley, however, is a different matter altogether. Despite his frailty, (he was at this point close to death), he dominates every scene; unstable, eccentric, impossible to read there’s a real sense of unease and disquiet whenever he appears. Anyone whose “career” is built on spouting, to all intents and purposes, bullshit, requires a huge amount of charisma to be successful and this was undoubtedly the case with Crowley. Charismatic enough to entice a figure of the establishment such as Wheatley, (a man who is inwardly please that the soldier on the train doesn’t recognise him), to answer his call.
The reason for Wheatley’s attendance turns out to be more than just catching up on old times however. He is there to help Crowley, to face a threat which will be too much for the frail, heroin addicted “beast” to confront on his own. Once again, great skill is shown in presenting the scenario around the threat and the discussions which convince the staid author to participate.
That participation involves the performance of a magick ritual, the presentation of which is yet another highlight of this brilliant novel. As seen through the experiences of Wheatley, it’s a stream of altered consciousness full of graphic and disturbing imagery.
It’s the crowning glory of Netherwood that Crowley’s motivations in involving Wheatley remain ambiguous. The hint of revenge – or spite - suggested earlier may be the case but other interpretations hold equal weight. Redemption is a common theme in conclusions and this too may be the case. Netherwood pours away the snake-oil, revealing the hidden depths to Crowley’s character and it’s possible that a personal tragedy is the driving force behind this final act. Maybe the motivation was his humanity after all.
Humanity – or, more precisely, human nature – has been the underlying theme of all three books in the trilogy. The three books have followed a traditional structure with the second part the darkest by far. A strange claim perhaps, given the black magic and Satanism which is so much a feature of Netherwood but my feelings on finishing this final part of the trilogy were ones of optimism, not least because of the stirring meditation on the nature of art – and artists (another theme of the whole trilogy) – on which it ends.
Each book in the trilogy is a masterpiece. Combined, they produce a kind of synergy, creating an outstanding reading experience. Perhaps their greatest achievement is to provide convincing portrayals of their protagonists despite being fictional accounts, all done through the skill and craftsmanship of the writing. Now that’s real magick.