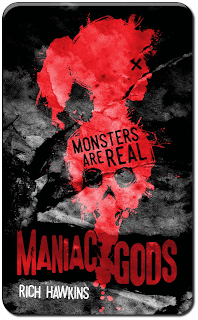 Maniac Gods is the new novella from Rich Hawkins and is published by the Sinister Horror Company. I’ve been a fan of Rich’s writing since his novella Black Star, Black Sun which I read back in 2015. Since then, his output has been nothing less than impressive, including the post-apocalyptic Last Plague trilogy of novels and his bloody and visceral take on vampire lore King Carrion.
Apocalyptic themes have been a constant in Rich’s writing and such is the case with this new novella. It tells the story of Albie Samways – a typical everyman Hawkins protagonist – whose daughter Millie disappears, along with the inhabitants of the village in which she lives, victims of a bizarre cult intent on bringing about their own version of the end days. The bond between father and child is another recurring motif in Rich’s books and here, as in all the other books, it provides a profound and moving emotional core to the story, a shining light amidst the darkness which engulfs everything around it.
It takes real skill to present such tender moments and not make them saccharine and this is most certainly the case here. Throughout, the writing is of such a high standard that I honestly think this is the best thing Rich has written. Just as these moments of hope and light pluck the appropriate emotional strings, so do the moments of horror. Where some would revel in the opportunity to layer on the descriptive prose, the approach here is the polar opposite. Indeed, many of the most horrific passages read almost like lists, basic descriptions of the nightmarish scenes and characters Albie encounters. Sparse and yet poetic at the same time it’s a devastatingly effective technique. The lean, stripped prose put me in mind of Adam Nevill, the creatures here presented akin to those of that author’s imagination but also to the very best of Clive Barker in his heyday.
And what horrors… Rich has created here a memorable set of creatures, most notably the Flayed – a group whose very name leaves nothing (yet somehow everything) to the imagination – acolytes to the mysterious leader of the cult Dr Ridings, himself a wonderful creation, his features hidden behind a bronze mask.
Religion is not so much a subtext of the novella than an integral part of it. It’s notable that Ridings calls those who oppose him “infidel” –a term perhaps more closely linked to certain faiths nowadays but which is a generic term for any non-believer. A key scene plays out in the wonderfully named Red Cathedral. It’s the gods worshipped by Ridings and his followers which provide the Lovecraftian overtones to the book, ancient deities lurking in other dimensions, awaiting their chance to break through the thin places.
Maniac Gods is a story brimming with so many great ideas that it might have worked better as a novel. That said, the shorter word count brings with it a sense of frantic urgency to the narrative, resulting in a thrilling ride towards a conclusion which is as good, and effective, as everything which has gone before.
This could be the quintessential Rich Hawkins book. For those who have yet to experience his writing there could be no better starting place. For those already familiar with his work, Maniac Gods will bring a warm tingle of recognition, and a new appreciation of his talent. At the very least, it should cement his reputation as one of the best writers currently working in the horror genre.