Broken on the Inside 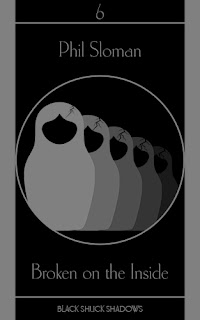 Broken on the Inside is the sixth of Black Shuck Books' Shadows series, mini collections of short stories. The books, which contain between two and five stories each, serve very nicely as a taster of the featured authors’ work and thus far have presented the wares of Paul Kane (twice), Joseph D’Lacey, Thana Niveau and Gary Fry. The newest addition to the series comes courtesy of Phil Sloman, a writer whose work I have very much enjoyed since I first encountered it via his novella Becoming David.
As well as featuring a single author, the books are also themed – in this case, the theme being that of mental disintegration, individual journeys into darkness leading to tragic consequences, in some cases for the protagonists themselves, in others for the people they come into contact with. The work of a modern day Poe then, (Edgar Allan rather than Cameron). Such tales are a standard in the realms of horror fiction and it’s often the case that the author will choose a first person narrative in their telling in order to add a touch of unreliability to the proceedings. It can be – and frequently is – an effective technique but it’s to Phil’s credit that he eschews this narrative voice, presenting each tale in third person yet still managing to create that unreliability and more ambiguity that you can shake a stick at.
The collection shares its title with the first story in the book, a previously unpublished tale which sets up the rest of the volume perfectly and which is, in my opinion, the strongest of them all. What I liked about it was the excellent characterisation (a feature of all Phil’s writing – I’m pretty certain he’s a people watcher) and the way in which the story is constructed, constantly wrong-footing the reader so that the conclusion, which is very clever, is made all the more potent. There are some great ideas going on in here – not least of which being the downside of technology - cleverly presented with just the right amount of black humour.
There’s a lot more black humour on show in the second story, Discomfort Food. It has a similar story arc to the opener, with the journey undertaken by the protagonist running along the same lines. It perhaps suffers a little because of this even though the narrative is presented in a very different way and also, maybe, because it was written for a very specifically themed anthology and there’s a feeling that the story was adapted to meet the book’s requirements. Which actually sounds more critical than I intend to be as there’s much to enjoy here, not least the opening scenes which feature a very bizarre conversation cleverly introducing the story’s main character whilst at the same time adding that all important touch of ambiguity and weirdness.
There’s a bizarre conversation going on in the Man Who Fed the Foxes too. Of the many startling images on display in Lars Von trier’s Antichrist, one which sticks in my mind is the trapped fox uttering “Chaos reigns” and so of course my mind conjured up that scene as I read this story. In the same way as the “things talking which can’t actually talk” technique (a term I’m thinking of copyrighting) employed in the preceding story, the conversations here are an outward manifestation of the psychosis within, the voices outside the protagonist’s head if you will. Grief is the motivating force in this story, the engine driving Paul Wilson’s journey to the dark side, a more benign influence than the paranoia and trauma which featured in the earlier stories but the end result is just as dark.
That end result is pretty grim, but is presented in such a way as to suggest what is happening rather than displaying it in all its gory detail. Grim things happen in There Was an Old Man too but this time the horrors are more overt. Whilst again taking the psychological breakdown of its protagonist as its main theme, this story ventures into body horror territory, presenting a scenario in which the psychological becomes the physical and which gives a new resonance to the phrase being eaten up inside.
Rounding off the collection is Virtually Famous, a story which I was very happy to play a small part in unleashing upon the world, first appearing as it did in Imposter Syndrome. It’s another cleverly constructed story, jumping back and forth between characters and timelines and – more importantly – reality and its virtual counterpart. Again, there are a whole host of ideas being presented here, including a fairly damning assessment of human behaviour and it’s a story in which the structure is perfect for the tale it tells, its fractured nature serving to confuse the reader, blurring the lines between what is real and what is not.
It’s a strong ending to a very strong collection. Along with the clever ideas already mentioned there’s a great deal of intelligence in the writing. Ideas are great but it takes skill to craft them into stories that are as enjoyable to read as these five are. This skill, along with a keen eye for the minutiae of human behaviour in all its dark reality mark Phil out as a writer to watch for in the future. I for one look forward keenly to what he comes up with next.

Email ThisBlogThis!Share to TwitterShare to FacebookShare to Pinterest
Labels: Black Shuck Books, Broken on the Inside, Phil Sloman, review