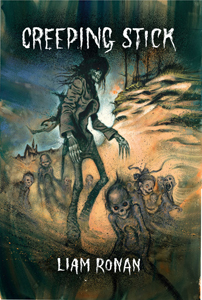 Creeping Stick is a novella by Liam Ronan and is published by Pendragon Press. It’s a debut by Liam and, I have to say, a mightily impressive one, written with great style and confidence and marking the author out as someone to keep an eye on in the future.
Set in the Welsh village of Hafoc in the early years of the twentieth century, it tells of the arrival – via shipwreck – of the sinister figure of Raziel Menalaus Spindle, a disfigured and deformed character, his physical appearance giving rise to his nickname – Creeping Stick. Accepted by, and slowly becoming an influential figure in the Hafoc’s society, Spindle unveils his plans to build a “Home for Progressive Youth”, an idea which is met with full approval until the details of what will actually take place within the home are discussed. The techniques he is to employ to “further” the children seem to be counter to religious teaching and it’s this which leads to a breakdown in the relationship between the village elders and Spindle.
Shunned by the villagers, Spindle becomes an outcast, reappearing on the day of the summer fayre with gifts of barrels of beer. The villagers drink freely, and fall into drug-induced slumber.
Then the children disappear…
It’s only when a girl escapes Spindle’s clutches to return to Hafoc that the true horror of what Spindle has been up to is uncovered. With his plans for his home dashed, he has instead constructed a building hidden out in the dunes which lie on the edge of the village: the House of Perpetual Lament.
The story is told as a first person narration, by Hafoc’s priest – witness to all of the events and a member of the group who set out for the House of Perpetual Lament in the story’s conclusion. It’s a distinctive voice, written in a style appropriate to the period of the book and it’s credit to the author that it’s maintained throughout the length of the novella. Presented as the confession of a dying man there’s obviously the risk of this being an unreliable narration but to be honest, this is of little consequence as the tale which unfolds is such a gripping one. What’s even more impressive is the amount of imagination on display here. The scenes set in the House of Perpetual Lament are a joy (if that’s the right word…) to read, as one horror after another is uncovered by the group of villagers. Vivid descriptive prose abounds here with some startling, not to say, disturbing imagery on display. The writing here is reminiscent of Books of Blood-era Clive Barker, that’s how good it is, and presents a potent mix of body horror, creeping tension and even a dash or two of steampunk imagery.
There’s a lot going on in Creeping Stick. Within the gloriously entertaining narrative there’s a commentary on small town narrow-mindedness, the use and abuse of power and it could even be read as an addition to the religion versus science debate or a musing on faith, or the lack of…
Creeping Stick is a wonderful piece of writing and an incredibly impressive debut. There’s a hugely entertaining epilogue too which at first seems completely remote from the novella itself but which gradually reveals its subtle links to the preceding narrative.


I loved it, and strongly recommend you check it out for yourself, which you can do here.
Posted by Anthony Watson at 13:16