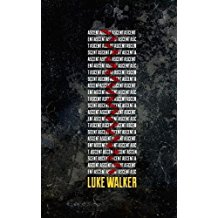 Ascent is the new novel from Luke Walker and is published by Crowded Quarantine Publications. Beginning with the imminent threat of nuclear bomb detonating outside RAF Lakenheath, it’s a novel which hits the ground running.
Actually, that’s exactly how the narrative begins, with one of the book’s main characters, Kelly, crashing into the reception area of Greenham Place, the high-rise building which serves as the location for the rest of the novel, a safe haven from the blast which turns out to be anything but.
Once inside, she encounters others who have found themselves inside the building at the moment of detonation; her sister Alex, Rod, Dao and Simon – but no one else… At least no one human.
So begins a dazzlingly inventive, fast paced and disorientating tale in which reality is blurred as much for the reader as the protagonists themselves. They find themselves haunted, somehow their own individual fears manifest as apparitions and inexplicable encounters. Unable to escape from the building, they become captives, hunted as well as haunted by the ghosts of their memories and fears.
There’s a wonderful sense of unease and disorientation created in Ascent. The protagonists have no idea of what is happening, or why – and those puzzles are shared by the reader. Has the bomb gone off and they are all dead? Has time somehow frozen and trapped them in a kind of limbo? It’s a massive strength of the book that it raises these questions in the reader’s mind, carrying them along with the narrative which cracks along at a fair old pace, offering hints and suggestions along the way.
Hinted at all through the book, is the presence of some elemental force guiding the action, a suggestion that the building itself is a manifestation of that force, a nexus of evil as it were, tormenting the protagonists, exploiting their fears.
It’s the individual confrontations with their personal horrors which provide some cracking set-pieces, many of which are not for the faint-hearted. Even amidst the fast-paced action, each character arc is given time to develop as the group of five find their own ways to resolution and, given that the commonality in all their stories is an overwhelming sense of guilt, even redemption.
I loved Ascent, it’s a high concept story which is evidence of a great imagination at work. There’s a whole lot of stuff going on here, but Luke handles all the narrative threads and ideas perfectly and has created a book which works on a whole range of levels. Exciting, scary and thought-provoking. Doesn’t get much better than that.


Ascent is officially released on June 3rd but you can pre-order here.
Posted by Anthony Watson at 10:21