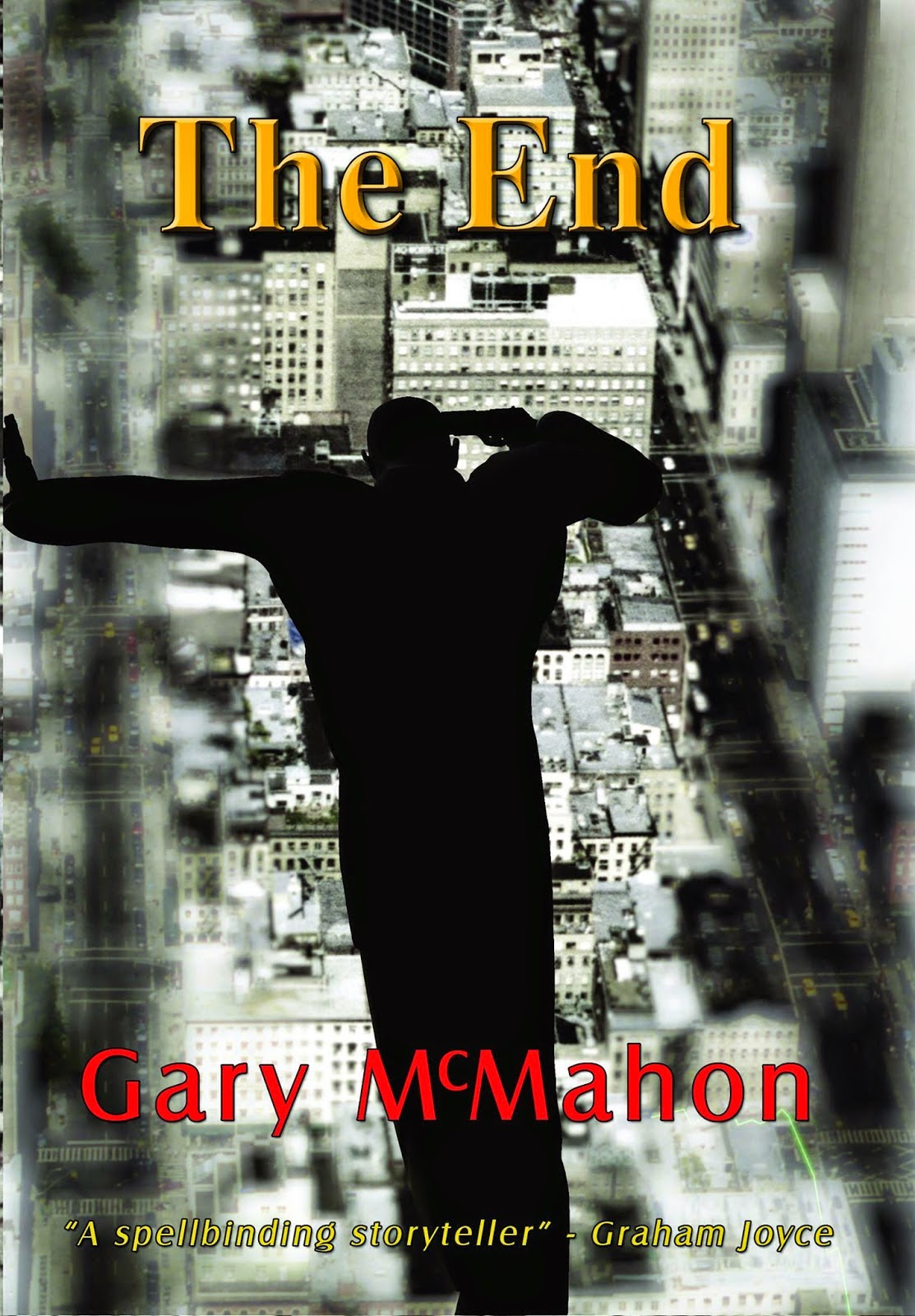 The End. This is the end, my only friend, the end…So sang Jim Morrison in the 1967 song bearing that ominous title. Its initial release was too early for even me to remember but the song is one of my cultural landmarks because of its use in Francis Ford Coppola’s masterpiece Apocalypse Now – its plangent tones accompanying the death of Colonel Kurtz, the music and lyrics providing the perfect accompaniment to the striking imagery on screen.
That was thirty five years ago (yes, I know…) but it made such an impact on me that I can’t help but hear the song whenever I hear those two words. (Pavlov – and possibly his dogs – would be proud).
So yes, there it was, running through my head when I read that the new novel from Gary McMahon shared that particular title. Whilst the song is about the end of a relationship (and various oedipal fantasies…) the book is about the end of the world – or at least mankind’s existence on it. It describes present day events surrounding the appearance of a “suicide plague” which compels huge swathes of the population to kill themselves – apocalypse now indeed.
It’s a first person narrative – a device which works brilliantly to convey the confusion as well as the horror of the situation and which also means that there are no real explanations for why what is happening is happening. There are hints and clues yes – a couple of the book’s most effective set pieces describe the appearance of messages implying that someone is to blame – but anyone seeking a full and detailed explanation will be disappointed. This is a good thing.
The narrator is Mack, in London on business when the plague hits, hundreds of miles away from his blind and pregnant wife Kay who is back home in their isolated cottage in Yorkshire. The bulk of the novel concerns Mack’s journey back home, accompanied by a small group of fellow survivors and it’s his determination to be reunited with the woman he loves that provides the emotional core of the book.
The journey is, of course, fraught with difficulty and danger. As if simply negotiating their way through traffic pile-ups caused by the mass suicides wasn’t enough, the survivors also have to contend with the “Leftovers” – zombies for all intents and purposes - who have become aggressors, determined to take as many people with them as they can, oblivious to their own horrific injuries and who provide the book’s gross-out moments in abundance. Much uncoiling of intestines is to be had…
The success of the book of course depends on the character of Mack, its narrator, and Gary does a brilliant job of creating an everyman that the reader can root for, enhancing that character with the romance between him and his wife to whom he is desperate to return. It’s therefore an incredibly bold move to, in a single scene, completely undermine the empathy and trust the reader has invested in the character when he makes a decision to follow a particular course of action.
It’s a move that works brilliantly though, shocking the reader, unsettling them and leaving them uncertain right up until the end of the book at which point context – of a sort – is provided. That’s not all the ending provides although to say more would be unfair. It’s incredibly powerful though, and deeply moving.
In the early days of this blog I referred to Gary McMahon as “The King of Bleak”. Whilst this was meant as a compliment it could also be seen as pigeon-holing or labelling –a suggestion that is a “type” of writer. This, as anyone who has read his work will know, is far from the truth but, I’ll tell you what, if you do want bleak there aren’t many better as The End convincingly demonstrates.
On the surface, The End reads as an exciting horror novel – and can be enjoyed simply on that basis - but there’s real depth here too with musings on humanity itself, (and not the more benevolent interpretations of the word) with suggestions that the plague is the ultimate outcome for mankind's greed and selfishness and the destruction they inevitably result in.


The End is evidence indeed that Gary's mojo is risin' and is published by Newcon Press. You can - and I thoroughly recommend that you should - buy it here.
Posted by Anthony Watson at 12:09