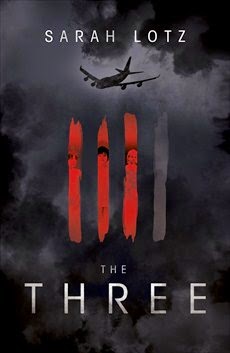 The Three is a novel by Sarah Lotz that begins with a gripping, present tense account of a plane crash as experienced by one of the passengers, a dramatic – and extremely effective - opening to one of the most compelling novels I’ve ever read.
The crash (of Sun Air Flight 678) is one of four which all happen on the same day – Jan 12th 2012, henceforth known as “Black Thursday” – across four continents, the events of which (and those following) form the basis of the book within a book – Black Thursday, From Crash to Conspiracy by Elspeth Martins – which makes up the bulk of the novel.
Presented as a series of interviews and testimonies, the book gives an epistolary, multi-voiced account of the aftermath of the crashes and in particular the miraculous survival of three children (the “Three” of the title). It’s a clever technique and one that works brilliantly. There’s a large cast of characters involved and it’s credit to the author that each one of them has a distinctive voice and personality. Many of the interviews are prefaced by short introductions from Martins and it’s within these that hints of what’s to come – and often shocking revelations – are planted.
Whilst on one hand The Three works perfectly as an eerie, supernatural thriller there’s so much more to it than that. It’s a deeply political book, one that has much to say about society and the ease with which those in power – or desirous of power – can use, or rather exploit tragedy to their own ends, for their own personal gain. It’s about truth and the manipulation thereof. The target here is religious fundamentalism – the zealots latch onto the survival of the children, presenting them as heralds of an imminent apocalypse, choosing their own interpretations of events to fit the their theories – but it’s not too big a step to see this as an allegory of recent political events. It’s perhaps no coincidence that it’s the crashing of four planes which is used by those with vested interests as a launching pad for their own extreme agendas and it’s telling that within the book a major plot development involves an American soldier on foreign soil…


The Three is an amazing read, a perfect combination of style and substance. It’s a novel that can be enjoyed on many levels, a chilling supernatural thriller that you’ll still be thinking about long after you’ve finished reading it. Which you should do by buying it here.
Posted by Anthony Watson at 09:44