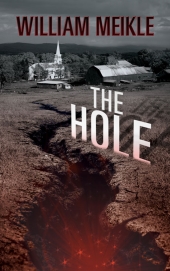 The Hole is the latest novel from William Meikle and is published in a variety of formats by Dark Fuse.. It tells of the bizarre happenings in and around a small town in where a strange humming noise brings about headaches and nosebleeds in the local population. It brings about much more besides however, namely huge holes in the landscape into which large parts of the town – and its inhabitants – topple.
As if this weren’t bad enough, creatures begin to emerge from the hole, to terrorise the survivors…
Oh, and the Government have set up barricades manned by military personnel around the town with orders to let no one leave…
So the scene is set for another tour de force of pulp fiction from the imagination of the best purveyor of out and out genre fiction currently plying their trade.
The Hole cracks along at a fair old pace (and is relatively short for a novel) and I devoured it in three sittings. Even though the narrative hurtles along, there’s still room for character development which makes you care about what happens to the protagonists despite their genre cliché origins – no mean feat in itself and testament to William’s skill as a writer.
The story’s influences are many and varied, strongest I guess is Invasion of the Body-Snatchers but I also felt the resonance of Stephen King’s Under The Dome and The Mist with their themes of isolated groups of people under the threat of something beyond their comprehension. The Hole is very much its own beast though, using – and acknowledging - these themes and influences but adding a hefty dose of originality to produce an end product which is a heady mix of science fiction and horror with some genuinely creepy set-pieces. There are contemporary cultural references too, HAARP, CDC and FEMA get a look-in and, as a resident of the “desolate” North East of England, I was pleased to see fracking getting a mention too.


On his website, William explains that he writes as an attempt to escape and that’s exactly what I did when reading The Hole. It’s a thoroughly entertaining book, one that took me back to the novels and films that first captured my interest in the genre. You pretty much know what you’re going to get with a William Meikle book which I say not as a criticism but as something positive as, without fail, they always meet – if not surpass - those expectations. I like to think that he has a whale of a time writing his books, I know I do when I’m reading them.
Posted by Anthony Watson at 11:41