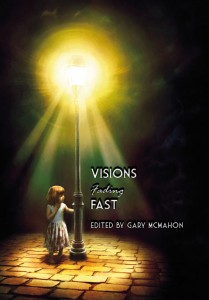 Visions Fading Fast is a collection of stories published by Pendragon Press and edited by Gary McMahon. I have a signed hardback edition and once again, in my unremittingly dull quest to champion real books over electronic ones, I'm overjoyed to hold this book as an example of how the former are far superior to the latter.

It's an excellent way to determine someone's age to ask them to name some R&B acts. If they go for the Stones, The Animals or The Yardbirds then they're really old but appreciate what real music is. If their answer includes Beyonce and Rhianna then they're young, and unfortunately have no idea what real music is. (You may have guessed which category I fall in to).
This nostalgia for "better" times (or at least "better" music) lies at the heart of the opening story Blues Before Sunrise by Joel Lane. It tells of Simon, a musician on a quest to go back on the road with his band "Blue Away" who had enjoyed moderate success in the nineties. Given the story is about a Blues musician, it has a suitably melancholy tone to it, Simon is an alcoholic, desperately searching for some meaning to his life, that meaning possibly to be found in music. The middle eight of a song (or is it the bridge..?) marks a change of tone, or key. This story has a middle eight although it comes quite late in the piece (a late eight?) and takes the narrative into some very dark places - literally and metaphorically. If you've ever wondered where the blues come from, this story provides a possible answer. I liked Blues... very much, the musical references worked with me (being of a certain age...) and the writing, as to be expected from Joel Lane, is poetic and beautifully crafted.
Wild Acre is by Nathan Ballingrud and is the first piece by him that I've read. On the strength of this story it won't be the last. A horrific, violent incident in the Blue Ridge Mountains leaves the protagonist Jeremy reassessing his own self worth, the incident leaving him with feelings of guilt and cowardice. It's a beautifully written character study of a man under extreme pressure, it's a transformation story, though not the kind you might be expecting from the opening passages. It's emotional stuff and those emotions are brilliantly described by the author.
Dancer in the Dark is by Reggie Oliver, the modern day MR James. I'd already read this story in the collection Mrs Midnight and Other Stories where it nestled among other tales of Theatre Folk about whom Reggie Oliver writes with consumate skill. There aren't any likeable characters in here, it's a tale of bitchiness and back-stabbing but written in distinctive Reggie Oliver style. It almost comes as a bit of light relief after the intensity of the previous story but it has its dark moments, most notably a scene beneath the pier on Brighton beach...
The History Thief is a high-concept story from Kaaron Warren, another first-time author for me. Alvin has died and is slowly decomposing on his lounge floor but his spirit wanders, and has developed the ability to physically enter the living, thereby becoming privy to their innermost feelings and thoughts. It's a clever idea and one which could easily be expanded into a longer work. There's a twist - of sorts - at the end of the story but I felt this weakened it somewhat, here were much darker avenues the story could have meandered down...
Paul Meloy's Night Closures is the last story in the collection and, like the first, makes much of nostalgia and  (in this instance childhood) memories of things past. Striking a chord always makes reading a story that much more enjoyable but there's a risk of overloading with nostalgia (and therefore sentiment) and forgetting about the narrative. This doesn't happen here. There is a reason for all the reminiscing and, when the story reaches its conclusion, its emotional impact is massively increased. Like the first story it's melancholy but it's a great end to a really strong collection of stories.