The Eighth Black Book of Horror. 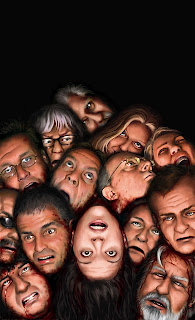 The Eighth Black Book of Horror is published by Mortbury Press and contains thirteen stories selected by Charles Black. Below is my review of the stories making up the collection which DOES CONTAIN SPOILERS.

Quieta non Movere by Reggie Oliver opens the collection and is yet another classy piece of writing from a writer who (to my shame) is new to me but who has produced some of the best short stories I've read in some time. (See my reviews for Bite Sized Horror and The Ha of Ha). This story bears some similarities to The Brighton Redemption which appears in Bite Sized Horror concerning as it does a cleric investigating supernatural goings-on written in the style of a period piece.  This is a good old fashioned scary story, the type to tell around a roaring fire ona dark winter's night.  there's no post-modern irony here, it's a traditional tale told in a traditional manner. I love horror that's grounded in reality, that holds a mirror up to society, but every now and then it's a pleasure to wallow in the classic traditions of horror literature.  I loved it. I've been so inpressed with Reggie Oliver's writing that I've ordered his new collection, Mrs Midnight and Other Stories.

The Last Coach Trip is by David A. Riley. Another author who's new to me, David's story, also in Bite Sized Horror, was so well written that it convinced me that there is still potential for good quality zombie stories.  This is another entertaining story about a day trip taken by a group of pensioners from a social club. One of them turns up late and appers out of sorts.  You'll probably guess why but the final twist in the story throws new light on everything that's gone before. It's a clever story and one I enjoyed very much.

Home By The Sea is by Stephen Bacon who is rapidly becoming one of my favourite authors. From mundane beginnings firmly rooted in reality - an ex-con heads north to Scarborough in an attempt at rehabilitation - the story moves into what first appears to be a standard "Creepy Old House" trope before reaching a climax that is genuinely unsettling. There's an image Stephen presents that's lodged in my subconscious which is truly disturbing - you'll know it when you read it. There's a nice touch of ambiguity too, which is always a good thing. Top notch stuff.

Boys Will Be Boys by David Williamson is up next. Have to say I have a few problems with this one.  If stories involving children genitally mutilating and then killing their parents is your cup of tea then this is the story for you. Gore and violence have always been part of horror and can be effective when handled properly. I feel this story was so extreme because it was trying to shock - trying too hard perhaps. The style in which it's written is emotionless, matter of fact, faux-naive and this somehow made it worse.  It's written that way to (I guess) represent the thinking of the kid in the story (who has to check the internet to find out what emotions are) and the title makes up the last line of the story, employed with heavy irony. It didn't work for me - maybe I dislike it so much because this review makes me sound like a bloody Daily Mail reader.

Behind The Screen is by Gary Fry. I liked the concept behind the conclusion of the story, the subject of the story watching helplessly from afar via webcam as terrible things happen to his family but felt that having the villain of the piece a real monster instead of just a deranged human being lessened the impact somewhat.  Also, having the main character such a sleaze-ball made empathy/sympathy difficult - his situation at the end of the story might have been even more effective if he'd been a happily married man.

I liked The Other Tenant  by Mark Samuels and felt it shared similarities with The Hack - a story by James Cooper in his collection The Beautiful Red.

Tok is by Paul Finch and a story I enjoyed a lot more than his contribution to the Death Rattles book.  I have a suspicion it's a story that may originally have been planned for his One Monster Is Never Enough collection as it's a story written around a real (!) creature of myth and folklore. Aside from some doubts over some of the logic in the story - following the murders of women on three consecutive nights, in order to protect his mother a man leaves his wife with her? - it's an entertaining read with a killer ending.  Being sad, I looked up the creature at the centre of the story in Wikipedia.  If only the residents of the housing estate under threat had done the same they'd have discovered they'd have been perfectly safe with just a few bricks...

Little Pig is by Anna Taborska and tells a Sophie's Choice-esque tale of the Russian occupation of Poland. The story is book-ended by two sections set in the present day which I feel would have worked better as just a single prologue.  You know when someone tells you a joke and finishes by saying "do you get it?" - I kinda feel that's what the epilogue does in this story.

Casualties of the System by Tina and Tony Rath is an odd little story which has me wondering how it qualified for a place in a collection of horrror stories.  It's told in a slightly tongue-in-cheek style and involves a radical new way of dealing with young offenders. Entertaining enough but a little too whimsical for my taste.

How The Other Half Dies is by John Llewellyn Probert and features a couple of characters whose smugness makes them instantly dislikeable.  The exposition fairy waves her magic wand fairly early on in the piece and pretty much gives away what's going to happen when the couple discover an intruder in their house.

Music In The Bone by Marion Pitman tells of an enigmatic musician with some interestingly manufactured instruments.  The title aside, there are enough clues all the way through this story to let you know what it's all about so the ending will come as no surprise.

The Coal Man is by Thana Niveau and tells of the present day repercussions of childhood rivalry turned tragedy.  It's an effective Bogeyman story, nicely told.

Mea Culpa by Kate Farrell provides a latin title for the last story to mirror that of the first.  I liked this a lot, a well written first person narrative which provides a fascinating character study.  There are a couple of twists at the end which work well, though even without them this would have been a strong finish to - in my opinion - a mixed bag of stories.
Posted by Anthony Watson at 17:18