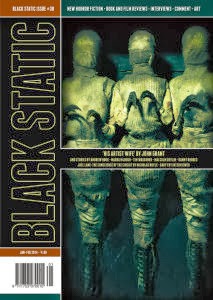 Black Static 38 is dedicated to Joel Lane and opens with a heartfelt tribute from Nicholas Royle which, as is only right and fitting, concentrates on Joel's writing, illuminating his character through the words he left us. Stephen Volk's consistently entertaining column is pretty heartfelt too, a plea for art for art's sake echoing - depending on your own cultural experiences, Theophile Gautier, Edgar Allan Poe, Metro Goldwyn Mayer or 10CC - and the freedom for story-tellers to write what they want - need - to rather than what market forces dictate they should. There are similar themes in Linda Rucker's Blood Pudding which bemoans the curse of branding and the sometimes detrimental effect this can have on "horror".
The fiction begins with Andrew Hook's A Knot of Toads. Of all the stories Andrew has contributed to Black Static this is my favourite and is my pick for the best of this issue. It's a thought-provoking take on the themes of fate and destiny which raises more questions than it answers (always a good thing in my opinion). It's told in first person (as are five of the six stories in this issue) which adds to the uncertainty and ambiguity, the narrator himself unsure as to whether he is in control or being controlled, whether his actions - and their outcomes - are predestined or all down to himself. I loved the themes contained in this story and my only criticisms are technical ones; an unfortunate typo suggested one of the characters lived in Wales rather than the Lake District, there's no railway line to Keswick (other than the disused one that's now a path) and no local would use the phrase "Lake Windermere" - as every quiz aficionado knows, there's only one "lake" in the Lake District - all the others are Meres or Waters. Minor quibbles though, and probably (actually, definitely) more an indication of my own pedantry.
Tim Waggoner's The Last Fear is a tight little story about night fears and paranoia. Waking in the night, the protagonist makes the decision to open "The Door", the one which plagues his dreams, dreams in which he has to hurriedly lock it against unseen assailants. What he discovers beyond "The Door" provides just the right amount of ambiguity to make it a well written and entertaining - if not entirely original - story.
Passion Play is Malcolm Devlin's first published story - and a very impressive first it is too. It tells of a police reconstruction of the last reported movements of a missing girl and is cleverly structured with impressive use of flashbacks. The missing girl is Cathy and it's the narrator of the story who is playing her in the reconstruction. The two had been friends and one of the flashbacks describes their discovery of images of the "Cross-Hatch Man" in the Stations of the Cross in their local church. There's a lot going on in this story but it all pulls together brilliantly. There's religious imagery, a real/imaginary monster and themes of identity and perception. It's an incredibly assured piece of writing and I look forward to more from the author.
The Hanging Tree by Maura McHugh is first person narrative number four and tells of the malign influence of the eponymous tree which has a history of suicide attached to it. The narrator was born beneath the tree at the moment her mother discovers the body of her father hanging from it and there are hints throughout that some kind of connection was made at that point with the tree - or something associated with it - influencing and directing her life from then on.
Passchendaele is an appropriate title, and theme for a story given the centenary of the commencement of the first world war and I have to say, given my own obsession with that particular period in history, I was very much looking forward to reading it. I have to say the story wasn't what I was expecting but that in no way affected my appreciation of it. I liked it very much. The main character is Hewson, a museum curator, visiting the Ypres area in preparation for a new exhibition. Whilst there, he begins to experience strange phenomena, sights and sounds that suggest the landscape around him is haunted - and with its history how could it not be? It's a subtle, atmospheric and poignant story that beautifully captures the horror and waste of the Great War.
The last story is John Grant's His Artist Wife. It's the longest story in the issue and is cleverly constructed to tell a story within a story within a story. There's murder and infidelity in this tale of a pulp-fiction writer working on his latest novel based on the wedding-night disappearance of a composer's wife. There's much life imitating art (or art imitating life) in a twisty, turny story of admittedly unreliable narration. I enjoyed it pretty much until the ending which didn't so much surprise as disappoint me.
Black Static continues to be the flagship publication for literary horror and it's always with much anticipation I await the next issue. You can (and should) buy it here.
Posted by Anthony Watson at 11:25