Monsters in the Heart. 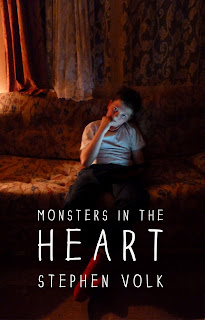 Stephen Volk's versatility as a writer has perhaps never been better demonstrated than by two of his stories published this year. This is the writer behind the elegiac, moving tribute to Peter Cushing that was Whitstable and also the masterclass in gross-out, the outrageous Arse Licker. Both were - for very different reasons - brilliant pieces of writing so it was with much anticipation that I looked forward to the release of his latest collection of stories, Monsters in the Heart from Gray Friar Press. There are fifteen stories in the collection, two of which are brand new and not previously published.
The first story is After the Ape which I'd already encountered in the Never Again anthology. I was blown away by it then, by its originality and imagination and was similarly affected on this second reading. Centering around events after the fall of King Kong from the Empire State Building it merges real life horror (and political comment) with iconic fictional characters to produce a - frankly - stunning piece of writing.
The death of another fictional icon is the starting point for Hounded another highly imaginative piece using the character of Dr Watson, here attending a seance after the death of Holmes and inadvertently releasing something terrible in the process (the title of the story providing a clue as to what that might be...)
There is much variety within the fifteen stories, in style and content. Some read like fables (Swell Head, Fear) whilst others touch on the surreal (Easter, Air Baby). There are "real" monsters, Monster Boy is an affectionate tribute to those created by the movies whilst Appeal For Witnesses updates an ancient mythology into a police procedural that put me in mind of some of Joel Lane's stories. In White Butterflies and Notre Dame the monsters are all too human, whether through violence and aggression or religious intolerance.
Who Dies Best provides a satirical look at the movie making business with a novel approach to filming death scenes whilst the immensely disturbing In The Colosseum uses inner city violence and voyeurism to deliver a blistering attack on the current state of TV broadcasting.
Pied a Terre is a ghost story but ironically is the one I enjoyed the least. In his notes, Stephen acknowledges the risks he took in writing the story, that offence could be taken. I wasn't offended but did feel slightly uncomfortable reading it. Good horror should make the reader uneasy, just not like this...
The Hair is a good old fashioned horror yarn, a tale of voodoo rituals leading to a conclusion that's truly horrible. And which, when you think about it a wee bit more, becomes even more horrible.
A Paper Tissue is possibly the least overtly horrific story in the book but which for me was the highlight of the collection. There's nothing supernatural in this tale of a couple holidaying in Italy but the writing is superb, a perfect description of a relationship that's failing until a chance encounter changes everything. The conclusion of the story is truly unsettling - subtle but deeply disturbing.
Monsters in the Heart is a marvellous collection. Imaginative, intelligent writing from a master craftsman. Highly recommended.
Posted by Anthony Watson at 16:37 No comments: 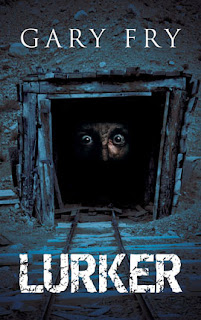 Lurker is the latest novella from Gary Fry and is published by DarkFuse. It tells the story of Meg, recently moved to the coast in order to rebuild her life following a miscarriage, seeking rehabilitation in the splendour of the countryside which is now her home. The story begins with the line "He was leaving her again" - specifically referencing the fact that her husband is leaving for work, meaning a two day absence because of the distances now involved, but also cleverly and succinctly  providing insight into the state of their relationship. Harry's insensitivity, selfishness and lack of awareness are established in these opening scenes, somehow he sees himself as the victim, that it's him who's made all the sacrifices.
Instead of support and love, Meg feels only isolation - those feelings exacerbated by the surroundings she now finds herself in. Only a few pages in and already the tone is set, disaster must surely be lurking just around the corner...
There's beauty too of course in those surroundings and a vivid picture is painted of that environment. An incorrect classification of a centipede as an insect aside, Gary does a great job in describing the wildlife and scenery of the landscape around Whitby, creating - for a while at least - an image of rural idyll.
It's when Meg stumbles upon some ancient mine workings that the so far understated feelings of isolation and paranoia come to the fore. Ruins are creepy places, dripping with atmosphere, and that atmosphere is brilliantly captured in the sequence where Meg becomes aware of something lurking in the shadows...
Lurker is a monster story but there's still some doubt as to its actual nature, what - or who - it is, even after the final page has been turned. This is a Gary Fry story so its the psychology that's as important as the narrative thrust and it's this that gives the story its edge. How much of what Meg sees and experiences is real and how much is a figment of her own imagination, her damaged psyche? The tale is very cleverly constructed with images encountered in the "real" world - including TV documentaries and kids playing outside the house, (arthropods in the garden) - taking on a darker significance in Meg's eyes. Many authors would have chosen to write this story in first person, creating an unreliable narrator so it's to Gary's credit that he tells the story in third person but still manages to create an extremely effective air of ambiguity.
I'd recommend, if at all possible, that you read Lurker in one sitting and thereby immerse yourself fully in the experience, allow the repeating - though subtly changing - imagery to get inside your own head.
The denoument of Lurker is open to interpretation - but then all the best ones are. It's a subtly crafted tale that packs a lot into its relatively short length. In much the same way that a certain American author has created an outstanding canon of work set in his own North Eastern coast, so Gary Fry is slowly doing the same thing here in the UK.
I loved Lurker and thoroughly recommend it.
Posted by Anthony Watson at 11:50 No comments: