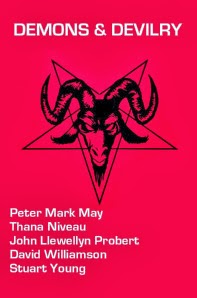 Demons and Devilry is the latest in the Pentanth series from Hersham Horror and contains five stories edited by Stuart Young on the subject of, well... demons and stuff. Does the spirit of Dennis Wheatley live on?  - (quite possibly, inside the body of Iain Duncan Smith it could be argued) - the stories in this anthology may go some way to answering that.  It's the fourth in the series and I can't help thinking the publishers missed a trick here by not waiting for another mini anthology to hit the presses before this one so it could be the fifth in the series thereby opening up the possibilities of much fun and games around the whole Pentagram/Pentanth thing. I digress, however.
The anthology begins with Peter Mark May's The Abhorrent Man. The story begins in the Carthage of 146BC during the sacking of the city by the Romans. Amidst the mayhem, a demon is released in an underground temple. The narrative then jumps forward to the 1920s whereupon an archaeological dig unearths the temple with drastic consequences.
There's a lot going on in this story - quite possibly too much for it's relatively short running length. Cramming so much in results in a lot of telling rather than showing and because of this, many of the scenes lack a sense of atmosphere. The author has obviously done his research, and it shows, but much of it seemed shoe-horned in and it's unfortunate that one of the characters quotes a temperature in degrees Celsius some twenty years or so before the scale was introduced. The Abhorrent Man isn't a bad story, it's actually a very good one - unfortunately it's been crammed into too few words and has suffered accordingly.
There's plenty of atmosphere in the second story however, Thana Niveau's Little Devils. It cleverly uses children as the protagonists, allowing their innocence and naivete to take them deep into some very dark places that adults would naturally avoid. Exploring a building site, they discover dead rats and bones scattered around the remains of a fire. Then things get a lot worse... The imagery associated with devil worship is well known, perhaps even cliched, but it's put to very good use in the story's conclusion, providing some genuine shudders and making this the strongest of the five tales.
Next up is The Devil in the Details - a nice pun of a title as might be expected from its author John Llewellyn Probert. And a very proberty tale it is too, exhibiting all the hallmarks of the author's distinctive style. Beginning with an almost cinematic description of a house on the Welsh coast (you can imagine the long helicopter tracking shot with a sinister voice-over as you read it) it's a darkly humorous piece about the less than successful attempts of Maxwell Chantry to summon Lucifer himself, aided and abetted by a sinister surgeon with a penchant for torture. I liked it a lot, laughing out loud on a few occasions and enjoyed the twist in the tail.
David Williamson's The Scryer takes some old horror tropes (or cliches if you're being cynical) and does... well... not much with them really other than to place them in a fairly mundane story. There aren't too many surprises in this tale of Dan, who, upon inheriting a big old house in the country, discovers a book made from human skin and a mirror. You can probably guess what's going to happen, and unfortunately you'll probably be right.
Rounding off the collection is Guardian Devil by Stuart Young, a novella no less which transports the reader from an S&M club to the Kabbalah's Tree of Life and back again, gaining enlightenment on the way. It was an experience for me as I've never been to either of those places and hopefully this vicarious experience of them will be the closest I come. Much like the opening story of the collection, there's a lot going on here and I echo my criticisms of The Abhorrent Man here, suggesting that there may be too much going on. Stuart has obviously done his research as well but I can only assume that he was somehow possessed by the malevolent spirit of Dan Simmons who forced him to Write All Of It Down. There are vast tracts of kabbalistic theory here and unfortunately they sometimes take you out of the story, interrupting the flow. It's all fascinating stuff, and makes for some startling imagery and set-pieces but it's a lot to take on board when all you really want is a scary story about demons. (Somewhat contrarily, I would have preferred that the connections to Cable St and its history mentioned in the story were actually developed a bit more so I guess there's no pleasing some people...)
Guardian Devil is pretty strong stuff - definitely not for the delicate flowers out there - and a lot of it is quite shocking. It's a hard hitting, disturbing story which - despite the reservations I've already mentioned - provides a strong conclusion to the collection.
The devil may have the best songs but he doesn't always have the best stories. There's enough in Demons and Devilry however to prove that there's life in the old dog yet.
Posted by Anthony Watson at 10:52