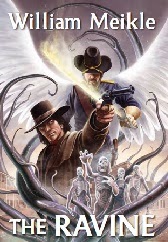 Friday nights as a kid always meant one thing - The Virginian on telly. Although I was probably too young to fully appreciate the storylines, it must have sparked something within me, generating a love of westerns that continues to this day. My love of horror developed a bit later but it too has grown and developed over the years in parallel. What could be better then than a horror/western fusion, a combination of my two favourite genres? Well, not a lot actually.
The Ravine is William Meikle's latest novel published in a variety of formats by Dark Regions Press, following on from their last collaboration, the immensely entertaining (and wonderfully produced - the hardback edition truly is a thing of beauty) Sherlock Holmes: The Quality of Mercy.
Part of the joy of genre fiction is the familiarity of its conventions, there's some comfort to be derived from reading a story where we immediately know what the characters are going to be like. Using stereotypes, archetypes even can be lazy writing though, and it takes real skill to use them in such a way that they bring a knowing smile to the reader but still endow them with enough depth for the reader to care about them and what happens to them. William Meikle does this and that's what makes his books such a joy to read.
Mysterious gunslinger? Yes. Noble cavalry officer? Yup. Rancher down on his luck? Oh yes. The Ravine has them all. What it also has are angels, demons and zombies, oh, and some very weird fish. Chuck all those elements together and you end up with a cracking tale of adventure and horror with some brilliantly effective set-pieces. What you also get is a tale of honour and redemption - the story could have been set in any time period or location but the western setting is perfect for it, a harsh environment where men, and women, very often had to do what men, and women had to do.
I loved The Ravine, and heartily recommend it.
Posted by Anthony Watson at 09:59 No comments: 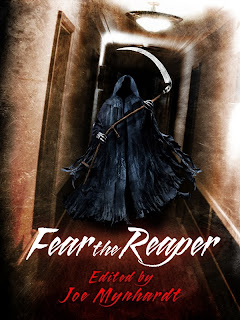 There are two things in life - or so we're told - that are unavoidable; death and taxes. Whilst Starbucks, Google and Amazon may beg to differ on the latter, there's no denying the inevitability of the former. And it's death that provides the theme of the latest anthology from Joe Mynhardt's Crystal Lake Publishing (showing commendable skill at choosing the best of the two options) with Fear the Reaper - a great title for a book, showing contemptuous disregard of the advice offered by The Blue Oyster Cult and bearing a tremendous cover from Ben Baldwin.
The book opens with Hecate, a poem by Adam Lowe which nicely sets the tone for the rest of the collection, one which - on the whole - sticks closely to the theme, a definite plus in my opinion.
The Life of Death by Mark Sheldon is the first story, somewhat fittingly as it tells of the birth of Death (note the capital letter) in a piece that reads like a fable, or a grim fairy tale but which for me could have been trimmed somewhat (with or without a scythe), the novelty aspect running out long before the words actually did.
There are twenty one stories in the book and all are of a high quality making this a substantial - but fulfilling - read and also excellent value for money. The authors all bring their own slant to the mythology of The Grim Reaper and the subject of death as a whole, some more successfully than others. My Dark Minds partner in crime provides a cleverly constructed story in A Life in Five Objects that provides a neat twist in the tail whilst Stumps by Jeff Strand proves that cheating death isn't actually such a good idea after all. It's a gruesome story but its dark, black humour makes it work, something I felt wasn't really the case with Dean M. Drinkel's Der Engel der Liebe which strayed a little too close to gratuitousness for my liking.
Stephen Bacon's Rapid Eye Movement is more a story of love than death but is a beautifully written, highly emotional piece and Gary Fry's The Final Peace focuses on those left behind coping with bereavement, a heartfelt, moving piece of writing.
The highlight of the collection for me was John Kenny's The Final Room in which Sam, a petty criminal on the run from the police stumbles into a shack in a swamp wherein he discovers his destiny... It's a great story with an ending that perfectly encapsulates the theme of the collection.
Fear the Reaper is a very, very good collection of stories with plenty of variation and originality in the different interpretations of the theme. It's the strongest of all of Crystal Lake's releases thus far and one I highly recommend.
Posted by Anthony Watson at 11:02 No comments: