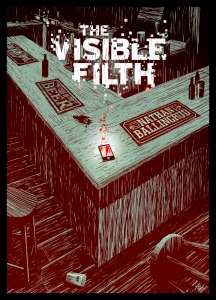 The Visible Filth is the latest chapbook produced by This is Horror and is written by Nathan Ballingrud. The author's collection North American Lake Monsters was one I was very impressed with so I had great expectations for this novella, expectations which I'm very pleased to report have have been met and, indeed, exceeded.
The story's protagonist is Will who works in Rosie's Bar in uptown New Orleans, a less than salubrious 24-hour establishment, a description of which begins the novella, complete with scuttling cockroaches, subtly setting the scene for what is to come.
The arrival of a group of students brings with it a violent brawl in which one of the bar's regulars, Eric, is wounded, glassed in the face with a broken bottle. Upon the group's departure, Will discovers that one of them has left behind a cell phone which he takes home with him. When he starts receiving text messages on the phone, the true horror begins...
The texts taunt Will but also guide him towards some images - and a video - that are stored on the phone. There are suggestions that the images, via the phone, exert some malign influence over Will, making him open the files but in reality, his decision to do so is probably down to the impulse within us all to look at that which we know will be horrible; the impulse that makes us slow down and crane our necks as we drive past a traffic accident; the impulse that makes us click on the play button of videos showing violent death, beheadings...
Of course, what's revealed in the files is utterly horrible and the author's prose here is perfect, brilliantly conveying the awfulness of what Will sees, transferring the sense of unease and disgust he feels straight into the reader's head. I was put very much in mind of the cursed video from Hideo Nakata's Ringu when reading these scenes, in particular the feeling of unease and dread that the "cursed" video in that film created in me.
There's plenty of disturbing imagery created in The Visible Filth - and the skill with which this is done is one of the story's strengths - much of it will linger in your memory long after reading. As well as this though, the novella presents another masterclass in the depiction of a relationship under strain - something that was also a feature of North American Lake Monsters. Will's relationship with girlfriend Carrie is going through a rough patch and the emotional nuances and dialogue between the two are pitched perfectly.
The Visible Filth is a grim read, one which will make demands of the reader. Bleak and nihilistic, it takes no prisoners and you'll be shaken and disturbed come the last page. Which is about as glowing a recommendation I can make for any horror story.

Posted by Anthony Watson at 09:26 No comments:

Email ThisBlogThis!Share to TwitterShare to FacebookShare to Pinterest
Labels: Nathan Ballingrud, review, The Visible Filth, This is Horror 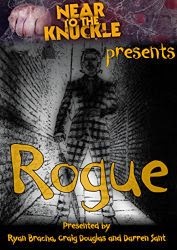 Rogue is an anthology of twenty two stories produced by Near to the Knuckle featuring the titular characters. The stories are set in a variety of locations - wartime London, the USA, the town just down the road from where I live (I kid you not - Northumberland may seem an odd choice of location for a gritty piece of crime fiction but An Imperfect Arrangement by Gary Duncan is set right there) and, in Fish Out of Water by Aidan Thorn, an independent aquarium shop.
The word rogue suggests a rather benign character, a scoundrel or scamp, but the examples on display here are far removed from that definition and the criminals, drug pushers, private detectives and hitmen encountered on these pages provide a wide variety of violent death and torture. There's politics too - though in a subtle, tangential way and even some humour - though of the darkest variety. The latter is most evident in Paul D Brazill's Route 66 and All That which introduces an entertaining set of hapless criminals and contains some zinging one-liners.
Most of the rogues feature here are already established characters before the story begins but a couple of the stories are almost "coming of age"tales wherein extreme circumstances force a character into doing something terrible.
The writing throughout is of a high standard, rising above the pulp origins of the theme and, as might be expected in a book with a definite hint of noir, a third of them are written in a first person narrative. This works well, getting inside the heads of the protagonists but probably the best analysis o the psychology of the villain comes in A Week of Sundays by T. Maxim Simmler in which an escape to the country for a club bouncer makes for some contemplation and an acceptance of his true nature.
I found the first person narrative most effective in Ryan Bracha's Weekend Dad, an incredibly dark piece of writing which provides a nasty twist at the end of a particularly grim story. (It also references one of my favourite albums, El Camino by the Black Keys but that's beside the point...)
There's a detached, dispassionate quality to the writing in Don't Tell by Gabriel Valjan which only serves to intensify the horror of what is happening and which made it one of the highlights of the collection for me.
Horror is precisely the right word to describe what happens in Old Times by Benedict J Jones, a searing destruction of one man's American dream in which petty criminal Danny finds out that his movie and novel generated vision of America is very, very different to actual reality. It's a hard, uncompromising read and one which cleverly deconstructs the glamorous view of the criminal as anti-hero.
Rogue is a fine collection of stories. One or two perhaps out-stay their welcome - this type of story I feel always benefits from brevity, a rapid, punchy style - and a couple mis-fire in their attempts to try and be too shocking. The good far outweighs the bad though and it's a collection I recommend.
You can buy it here.
Posted by Anthony Watson at 09:40 No comments:

Email ThisBlogThis!Share to TwitterShare to FacebookShare to Pinterest
Labels: Close2thebone, Near to the Knuckle, review, Rogue

Tuesday 31st March saw publication of the latest anthology from Charon Coin Press which will feature stories set in (ultimately) all fifty states in America. The state in this instance is Louisiana and the publishers received so many quality stories that the decision was made to produce two volumes in order to incorporate them all.
I'm glad they made that decision because it gave enough space to allow my story Indigo into Volume II. I can't tell you how chuffed I am to have made it to the final selection. Perhaps fate had a part to play in things - I'd already pretty much completed the story before I even knew that the market was open so it was too good an opportunity to miss not to submit. I'm glad I did - editor Jerry Benns is doing great things with the press and the series is taking off in a big way. It was a pleasure to work with him during the editing process and his enthusiasm for the whole process is apparent and infectious.( He has patience too - especially when dealing with prima donna writers banging on about timelines and tenses...)
I'm honoured, and a little amazed, at having been included. It was a bit of a risk writing a story in first person where the narrator is a character so very different to myself (a young, black blues musician in Depression-era America) so I guess it's validation of a sort that I did it well enough to be included in an American publication about a very American subject.
Music plays a big part in the story, was the reason I wrote it in the first place. Music has mystical properties, has its own powers over and above simple enjoyment and was a major force in the time period in which the story is set, bringing people together, providing an escape from the harsh reality that day to day life really was. In Indigo it provides something else too...
By way of appetite-whetting, here are the opening paragraphs. If I've tempted you to read further, you can buy the book (in real or electronic versions) here.

When Lowell Johnson took out his bottle-top slide, closed his eyes and began to play Indigo a hush fell over the room. While his fingers plucked out that twelve bar blues, the glass slid up and down the strings of his dobro like it was greased, bendin’ those notes into somethin’ more than they really was, somethin’ beautiful.


And then he began to sing, still he had his eyes closed, his deep, bass voice growlin’ out the words. It was like everyone was transfixed, hypnotised or somethin’ – the music took them away somewhere, somewhere different for everyone there but someplace good. Wasn’t like he was such a good singer all told, but it was the story he was tellin’, the words themselves, that held us all in rapture. The room was full of smoke and even it seemed to move in time with the music, driftin’ slowly here and there like clouds of ghosts.


He didn’t open his eyes all the way through that song and not for some time after. When he finished, no one clapped –at least for a moment or two, it was like we all needed time to come back from that place he’d taken us to. We did clap though, and the sound gained its own momentum, startin’ slow but buildin’ to a crescendo of noise. Everyone was smilin’, some was even laughin’, and that was somethin’ you didn’t hear a lot of – not in Briersville leastways.


Lowell nodded slowly in appreciation then got up to leave the stage. It was like somehow the playin’ of Indigo had took it out of him. At least that’s how I figured it at the time. Course, now I know the real reason.


Anyways, just a few moments after he’d gone, the whole place erupted back into life, like the moment had never happened. Much enjoyment was had by all, long into the night and, though there was plenty more music to come, none of it came from Lowell.


That was my first ever visit to Creoles and Mr Johnson had played Indigo. Seems like fate was playin’ her hand even then, right at the beginnin’.