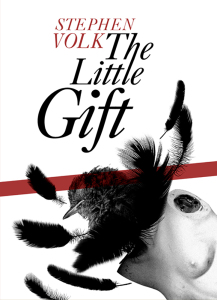 One of my favourite things in the world is to read a story and then, once it’s finished, find myself still thinking about it, reassessing and re-evaluating what I’ve read, gaining fresh insights, revealing subtleties which registered only subconsciously on first exposure to the words.
Such was very much the case with the new novella from Stephen Volk, The Little Gift which is published by PS Publishing.
It’s a slim, but beautifully produced (and illustrated), volume and I rattled through it in a single sitting in less than an hour. Its brevity belies its content however as what we’re given here is a tale of massive depth, the words and story undergoing some magical synergy to create a piece of work which stealthily infiltrates your mind, a first person narrative which makes you believe the story is heading in one direction before craftily heading off somewhere completely different.
The first person narrative is absolutely essential to the story. Yes, the narrator is unreliable – but aren’t they all? Narrators (not to say readers) will always superimpose their own interpretations on stories but his unreliability isn’t the most important thing anyway. What the narrative provides here is a beautifully crafted exploration of character. And not a very nice character at that.
It’s difficult to say too much about the Little Gift without giving away key plot developments. Bad things happen, some very bad things happen – both directly and indirectly involving the narrator and it’s his attitudes towards these events which provide the deepest insights into his character.
I chose Stephen’s story The Peter Lorre Fan Club as my favourite of last year because of the skill with which he slowly unfolded the story by means of dialogue alone and there’s as much skill on display here this time using a monologue. Some may find metaphors for society in general in the attitudes of the narrator, but even as “just” a description of a fairly – actually deeply – unpleasant individual, The Little Gift is an outstanding piece of writing.


A week after reading it, I’m still mulling over The Little Gift. It’s a very, very clever piece of writing and I highly recommend you check it out for yourself.
Posted by Anthony Watson at 11:39 No comments: 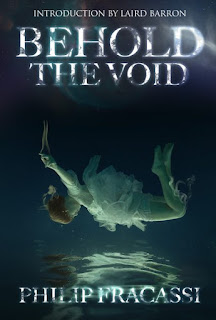 One of the many highlights of 2016 for me was “discovering” the writing of Philip Fracassi, with two novelettes, Mother and Altar and a novella Fragile Dreams. Much joy then, at the prospect of starting 2017 (kinda) with a collection from him, Behold the Void, which is published by Journalstone.
The two aforementioned novelettes make up part of the collection and my reviews for them can be found here and here. It’s with much joy again that I can report that I found the rest of the stories in Behold the Void to be of as impressively high standard.
Soft Construction of a Sunset opens the collection, a gloriously constructed tale in which the horror gradually reveals itself, a slow build-up of tension from the almost poetic opening lines to its twisted conclusion. Told in present tense, the narrative immerses the reader in protagonist Tom’s response to friend Marcus’ plea for help, a technique that pays of supremely when the reader realises the final horror just before Tom himself does.
Family dynamics have a big role to play in two of the stories, Coffin and Surfer Girl. Both are incredibly dark tales, with subject matter not for the faint-hearted and teenagers as their protagonists. The former delves into folk mythology with hints at a Green Man type character – although with a less than benign nature than would be traditional whilst the latter charts young Adolf’s trip to Acapulco with his mother and her new boyfriend Steve. It’s a marvellous character study of a disturbed psyche and has an opening line which is destined to feature in any number of “best ever” lists.
The Baby Farmer provides a potent cocktail of priestly indiscretion, child murder and apocalyptic prophesy in a story which switches between present day narrative and the historical diaries of a woman incarcerated for the kidnap and murder of children. It’s another cleverly constructed story, jumping between the two narratives and the voice employed for the diaries is impressively convincing.
Big decisions are required in Fail-Safe, a monster movie wrapped up in a psychological drama. At its heart is a moral dilemma, a classic head and heart conflict. It’s an almost Schrodingeresque scenario facing the son of two loving parents, one of whom definitely is, and the other who might be, a ravenous, blood-thirsty monster. Open the door and let them out? You decide…
The Horse Thief is one of my favourite stories in the book. There are hints of the surreal in this tale of the titular villain and his services to provide horses to clientele with very specific, and very strange requirements. The story’s strange nature, and darkness, put me in mind of the writing of Ralph Robert Moore – which is praise indeed. Tales of redemption are always winners for me and the route this story takes towards that end point (whether or not it’s achieved is open to discussion) is a hugely entertaining – if slightly disturbing – one. It’s strange and weird and I loved every moment of it.
The final story in the collection is Mandala and is probably my favourite of all of them. It’s also the story which most effectively encapsulates the theme suggested by the book’s title as it’s an exploration of the forces which dictate our destinies. Are our actions truly our own or are they guided by forces way beyond our imagining? It’s another impeccably constructed story – the major themes are introduced early on with descriptions of celestial bodies and tides – with a succession of inter-related events ultimately leading to tragedy. There’s a certain inevitability about what happens in the story – which, I guess, is the whole point of it - and the writing is so good that the reader cannot help but be drawn into the action which unfolds. There’s a long scene, on a beach, which is one of the most terrifying and tense I’ve read in a long time. It’s a story which is, well… cosmic. It’s also got scary ghosts in it.


Behold the Void is a stunning collection and one which I enjoyed immensely. I anticipate seeing it mentioned in many year’s best lists to come. I thoroughly recommend you check it out for yourself.
Posted by Anthony Watson at 14:54 No comments: