Samurai and Other Stories. 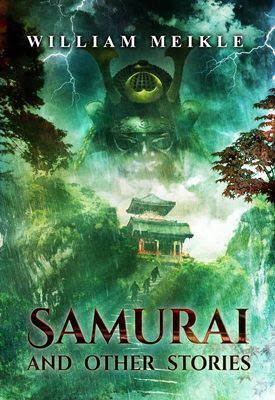 Samurai and Other Stories is a collection of stories by the prolific William Meikle and is published by the equally prolific Crystal Lake Publishing. The opening story gives the collection its title and tells of a group of shipwrecked sailors uncovering something terrible in a Japanese temple, a story which displays many of the author's trademarks; a historical setting, a band of "real" men/adventurers encountering the supernatural, beautifully choreographed action and a nice tongue-in-cheek sense of humour.
Historical settings are a feature of many of the stories, most effective amongst them being Inquisitor in which the tables are turned on the eponymous protagonist in a tale of 15th Century Cosmic Horror, (not something he was expecting...) and The Havenhome - a story that provided the backbone to his novel Night of the Wendigo.
Another theme common to Willie's writing, his love of music, also winds its way through the stories, a folk-song provides the basis for a Revenge From Beyond The Grave story in The Shoogling Jenny, whilst The Scotsman's Fiddle plays a tune that opens doorways to places best left alone. The power of music is demonstrated dramatically in Rickman's Plasma - and not in a good way...
Private Investigator Derek Adams makes a couple of appearances, in A Slim Chance which ends the collection on a suitably dark note and Home Is The Sailor, a gloriously over the top zombie tale that I'm guessing won't be used by the Largs tourist board in any of its literature.
There are monsters here aplenty, many of them big, nasty creatures to be fought with sword and gun but the worst monster of all - of the human variety - is to be found in Living the Dream, a dark story of obsession and murder. Samurai is full of action and adventure, thrills and spills and plenty of supernatural chills. There's depth to the stories too though, and real emotion. These are most apparent in two of the quieter tales, The Yule Log - a melancholic tale of loss and Turn Again, my favourite story of the collection which illuminates the circular nature of existence, the links between the microcosm and macrocosm. Heavy stuff but presented with a deft touch, and evidence that there is so much more to William Meikle than a purveyor of pulp.
Samurai is a great collection, page turning stuff that will keep you entertained throughout. You can buy it here.
Posted by Anthony Watson at 10:31