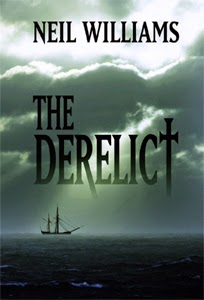 Never judge a book by its cover. Sage advice. Except of course if that book cover has on it the words Jeffrey Archer - in which case judging is entirely appropriate. It has to be said though that it's sometimes difficult not to appraise the merits of a book by what's presented on its cover and the art work which adorns the front of it is as important as what's contained within those covers. And yes, I know the phrase "don't judge a book by its cover" is not meant to be taken literally but its use in that context allows a neat introduction for the new novella from Pendragon Press - The Derelict by Neil Williams, the context being that Neil has made a name for himself already in the small press with some astounding cover art. His credits are too many to mention here but anyone enjoying the current Terror Tales series from Gray Friar Press or Spectral's serialisation of Simon Bestwick's Black Mountain will be very familiar with his work. (Scroll down slightly and you'll see more of his work adorning the cover of Horror Uncut).
As might be expected, Neil has provided the art work for his own book and quite a cover it is too, absolutely dripping with atmosphere. The good news is, that atmosphere is created just as effectively by the words within - this is an extremely well written, and crafted piece of work.
Presented The Rime of the Ancient Mariner style, with an "old, mad drunkard" sharing his tale for the price of an ale, the story relates events surrounding the discovery by the schooner Albin Grau of the seemingly deserted brig Persephone. And yes, those names are entirely significant, Grau a production designer on a famous 1922 horror film and Persephone the daughter of Demeter, the goddess whose name was appropriated for the name of a ship in a relatively famous novel of 1897.
Nods then to iconic works from the past but also to more contemporary horrors, the discovery of the "deserted" ship referencing Event Horizon and Alien as well, of course, as the Marie Celeste. It's no surprise then that the Persephone isn't quite as deserted as it first seems.
The use of these familiar tropes in way diminishes from the power and effectiveness of the novella however. As I stated earlier, the atmosphere is beautifully created and that results in the reader becoming completely immersed in the story which unfolds. And quite a story it is too, cracking along at a fair old pace and with some brilliantly constructed set-pieces. One in particular, involving a rowing boat and rope clambering will have you on the edge of your seat.
The Derelict is a good, old-fashioned (in the best possible way) horror yarn and I had a whale of a time reading it. It's the prefect tale for a Halloween night so get one now before the end of the month. Get one anyway (which you can do via the publishers), it's a great read. The novella is available in paperback (as a limited, signed edition) or as an e-book though I would recommend the former simply for a full appreciation of the art work which adorns it.
Neil's There Shall We Ever Be was the highlight of the Ill at Ease II collection - a subtle, slow burner of a story which demonstrated his skill at creating an atmospheric piece of writing. The Derelict is further evidence of those skills and I recommend it highly.

Posted by Anthony Watson at 09:58 No comments: 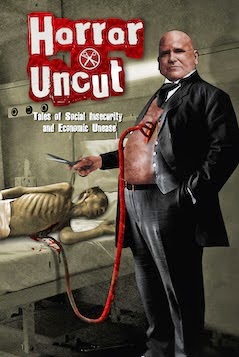 If one of the functions of horror fiction is to hold a mirror up to society, to reflect real life fears and concerns, then right now must feel like a literary feeding frenzy for purveyors of the weird with the global recession rumbling on and a set of austerity measures put in place by a group of millionaires suffering from the unfortunate delusion that they know what's best for everyone. Perhaps the best line of fiction to arise from the present climate is David Cameron's claim that "we're all in this together", the utter-bullshitness of which must place it high in the list of all-time How Stupid Do You Think We Are? quotations, (or the Clarkson List as it's coming to be known), but now we have Horror Uncut from Gray Friar Press which contains seventeen stories of "social insecurity and economic unease" which provides a much higher quality of fantasy writing altogether.
The collection is edited by Tom Johnstone who completed the book after the tragic death of its co-editor Joel Lane and who provides a thoughtful and insightful afterword to the stories.
Specific policies provide the inspiration for many of the stories, including Ptichka by Laura Lauro, A Simple Matter of Space by John Forth and The Ghost at the Feast by Alison Littlewood, the latter the only story in the collection to directly feature the politicians responsible in a story which examines the relationship between MP and constituent.
As an employee of the NHS I'm all too aware of just how "safe" the institution is in the hands of the present government and the threat of privatisation and its general mismanagement provide the basis for David Williams' The Procedure (which unfortunately I felt got the tone wrong and suffered from a twist that was obvious early on) and Joel Lane's A Cry for Help which opens the collection with perfectly pitched, biting satire. Funding - or lack of - for mental health services is the subject of one of the best stories in the collection, Thana Niveau's No History of Violence which ends the book on a truly chilling note.
Supernatural themes are relatively scarce for a book of horror stories but are employed most effectively in Gary McMahon's Only Bleeding (whose title gives a hint as to which metaphor is put to use in it) and Simon Bestwick's The Battering Stone, another story of his to feature the character of Paul Hearn and which hints at ancient forces feeding off misery and austerity.
Capitalism rears its ugly, greedy head in Priya Sharma's The Ballad of Boomtown and Stephen Hampton's The Sun Trap in which the family unit becomes allegory for the banking crisis in a story that's probably a little too predictable and which suffers from a few too info-dumps.
Exploitation is the keynote of Anna Taborska's The Lemmy/Trump Test, David Turnbull's The Privelige Card and another trademark John Llewellyn Probert piece The Lucky Ones. The exploitation is of the poor, by the rich - a scenario that forms the backdrop to John Howard's Falling Into Stone in which metaphor and harsh realism mix together perfectly.
A more subtle, tangential approach to the effects of the austerity measures on individuals is exhibited in Roseanne Rabinowitz's Pieces of Ourselves and Stephen Bacon's The Devil's Only Friend, affecting ghost stories both.
Optimism of a sort is provided by Andrew Hook's The Opaque District which is set in a future where queuing for food is the norm and where protagonist Jay is offered a glimpse - a promise  - of somewhere better... Better times ahead then? Maybe not.
Horror Uncut may not change minds or influence policy but it's an excellent collection of stories that do have important things to say. It has to be said it's unlikely to appeal to Daily Mail readers - which is about as high a compliment as I can pay it.
Highly recommended.
Posted by Anthony Watson at 15:35 No comments: