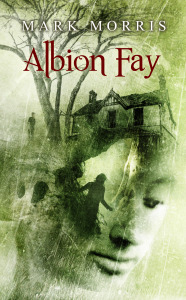 Albion Fay is the new novella by Mark Morris and is published by Spectral Press. It begins with a funeral, pretty much setting the tone for everything which follows and introduces us to Frank, the first-person narrator of the story. There’s a great deal of skilful character development here, painting a picture of a man hiding from the world, paranoid and over-analytical of everything – and everyone – around him. This, of course, sets up the narrative of the story wonderfully, planting the question in the readers’ minds of how Frank came to be this way.


What follows is a fractured narrative that jumps backwards and forwards in time – a technique that mirrors the broken nature of Frank’s family; sister Angie, loving mother Pat and father George whose first scene in the book presents him as a short tempered bully, characteristics that develop along with the story until he becomes the catalyst for the life changing events which follow.


George is a catalyst but so too are events at Albion Fay itself, the house which is to be the family’s holiday home for a week. The caves in the woods which surround the house allow the introduction of a supernatural element to the story but this is done in a subtle way, the first person perspective – which brings with it all the baggage of unreliability – means that just the right amount of ambiguity is brought to the narrative, these supernatural elements enhancing rather than overwhelming it.


As Adam Nevill’s thorough and detailed introduction to the book indicates, this is a story about loss and perhaps the greatest loss of all here is of the childhood innocence of Frank and Angie. The story goes to some very dark places but the writing is so assured and confident that the tragic events which unfold really do shock and aren’t gratuitous. Albion Fay is a Greek tragedy – although a very British one. (Yes, the name of the house – and book – is a clever one). It’s a brilliant example of quiet, understated writing that delivers its horrors efficiently and extremely effectively. There are similarities here – in terms of general themes – to Mark’s previous novella It Sustains, but both are prime examples of intelligent, literary horror and evidence of an author pretty much at the top of his game.


I thoroughly recommend Albion Fay and you can buy it here.
Posted by Anthony Watson at 11:11 No comments: 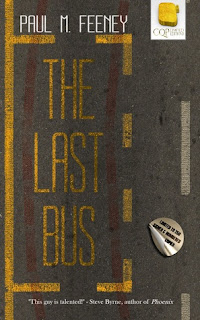 Ah, the joys of travelling on public transport – how shall I list them? In less time than it would take to list the horrors thereof, truth to tell. Aside from the regular unreliability, the noise and smell, the heaters that only seem to work during the hottest summer days plus many other assaults on the physical being, the practice brings with it its own peculiar array of psychological trauma, turning even the most mild-mannered individuals into judgemental, territorial and paranoid sociopaths. The tension of waiting in a queue, wondering if there’s going to be a seat available – preferably a double seat because the thought of having to sit next to someone else is unbearable. And then, when you’re securely in situ, the apprehension that sets in every time the bus stops and someone gets on that they’ll sit next to you, disrupt your personal space, the way you deliberately avoid eye contact with them, the familiar mantra running through your head as they make their way along the bus “don’t, don’t don’t don’t don’t…” invariably terminated by a heartfelt bastard! as they do. This immediately followed by the feelings of intense hatred towards those other passengers who have sat on the outside of the double seat, or put their bags there to prevent infiltration. Bastards.


Of course, that could just be me.


Horrors indeed, but nothing in comparison to those endured by the passengers on Paul M Feeney’s The Last Bus, a novella published by Crowded Quarantine Publications. Despite the title, the bus is actually one of the first of the day, transporting a motley bunch of commuters to an unnamed city. An explosion within the city initiates a series of events that turn what should have been an ordinary day into an extraordinary one.


The book is an homage to B-movies and it uses a well-worn trope of those films in bringing together a disparate group of individuals and watches how they cope with the extreme events happening around them.


The characters on the bus are, to some extent – although in keeping with the B-movie origins of the tale – stereotypes but the author takes great pleasure in subverting them allowing for some unexpected twists and turns. It’s a strength of the book that time is taken to develop these characters so that you will either be rooting for or wishing a terrible death on them.


There are terrible deaths, gleefully devised and described and most of these occur within “interludes” – breaks from the main narrative set on the bus, describing, and fleshing out, what is happening in the world outside. Gore abounds here – as do in-jokes, the names of the victims will be instantly recognisable to anyone who spends time in the world of horror fiction. My own personal jury is out on this device – it did make me smile but at the same time took me out of the narrative.


The story which unfolds in an epic one but the approach taken – focussing on a small group of individuals – makes it perfect for novella length. As mentioned earlier, it’s basically a B-movie and they always worked (and so, by dint, does the novella) because they were short and over long before rational thought had a chance to kick in and tricky questions about logic and realism had an opportunity to rear their heads. This could easily have been a novel but I’m glad it isn’t – it’s a quick read and the narrative cracks along at a fast pace and it’s all the more enjoyable for that.


My only encounter with Paul’s work prior to The Last Bus was The Weight of the Ocean. That was a deeply moving, personal piece of writing – sad and melancholic. It’s fair to say that his new novella is about as far removed from that as you can get which only goes to prove that he’s versatile, as well as gifted, as a writer.


I really enjoyed The Last Bus and recommend that you should buy it – which you can do directly from the publishers..
Posted by Anthony Watson at 09:12 No comments: