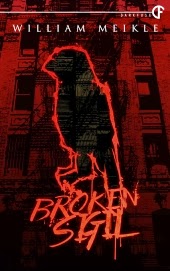 I mentioned in my review of last year that I thought the novella was probably the best format for horror stories and - whilst I stand by that view (all these weeks later!) - I have to add the caveat that sometimes the themes and ideas imagined by the author demand a longer form so that they can be developed adequately. In the same way that some short stories outstay their welcome, so a novella can seem rushed, with too much crammed in. Such was the case with William Meikle's latest work Broken Sigil published by the ever impressive Dark Fuse.
Whilst this may seem critical or even negative, it's actually an indication of how much I enjoyed the book - I was literally left wanting more. It's a high concept story and the concept is an excellent one, one which I feel could easily be expanded into a full-length novel.
The story's protagonist is Joe Connors, a policeman working in the Internal Affairs Division whose latest investigation involves an "officer down" situation where one cop has killed another. The dead man is Joe's ex-partner and had at one time been his best friend, the reason for the breakdown in their relationship something which provides the basis for what happens when the investigation takes a step away from mundane reality and into something much more esoteric...
There's a distinct noir feel to the narrative, told as it is in first person and the dead partner scenario is a subtle nod towards The Maltese Falcon. As the story progresses, that novel (and film) becomes ever more significant.
To say to much about what Connors discovers in the house where the shooting took place would be to spoil the story but that's where the high-concept stuff I alluded to before really comes into its own. It's a highly imaginative premise and one which is delivered consumately (albeit too quickly...) Yes, Broken Sigil can be read as a police procedural with some supernatural overtones but there's so much more to it than that. It's a story of love and loss, of grief and obsession, of life after - or perhaps more accurately alongside - death and the lengths people will go to to cheat it. It's also a warning to be careful what you wish for and that some things are best left alone...
I really did want more from Broken Sigil, the concept behind it is intriguing as well as entertaining and I was sorry when it came to an end. It's a great read and I highly recommend it.
Posted by Anthony Watson at 10:30