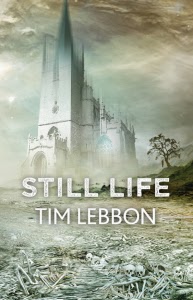 Still Life is the latest novella in the Spectral Visions series published by Spectral Press and is written by Tim Lebbon, who joins ranks with Gary Fry, John Llewellyn Probert and Stephen Volk who have all produced books of the highest quality. It's another beautifully produced book with an amazing cover image by Jim Burns which illustrates key elements form the plot.
And quite a plot it is too. Epic in fact, and it's to Tim Lebbon's credit that he can create the world in which the story takes place, and convey all the detail the reader requires in a format as short as a novella. It's a vignette really, a glimpse into a much bigger story, but it works very effectively indeed.
An invasion by "The Enemy" (and I love the fact that no other detail is given in the book about them) has left a subjugated population, corralled into settlements and living under martial law. One result of the war - and an idea I absolutely loved - is the "Road of Souls", a road made up of the remains of those killed in battle (and illustrated on the cover). It's a great concept and reminiscent of the roads constructed by the Nazis from Jewish headstones in the concentration camps during the second world war. That echoing of concentration camps is also apparent in the description of life in the settlements, most notably in the characters of the "Finks", collaborators very similar to the kapos of the camps.
Where there's subjugation, so there is resistance and it's this that provides the main narrative thrust, centering in on Jenni, whose reluctance to become involved is overcome by - well, that would possibly give too much away, suffice to say that it provides one interpretation of the book's title.
Still Life is an immensely satisfying read and a fine addition to the Spectral Visions stable. 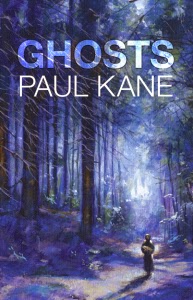 Ghosts is a collection of sixteen stories and one poem from Paul Kane, drawn from his back catalogue and based on the theme of, well, ghosts. The suitably atmospheric cover is by Les Edwards and it is, of course, another beautifully produced book.
It's a strong collection of stories, written in clear, precise prose - there aren't too many stylish flourishes here, this is straightforward story-telling. With so many stories, there's always the risk of it being a hit and miss affair and I did feel that was the case here, with one or two of the stories veering too far into sentimentality. It's difficult in these post-modern times to make a ghost story scary and the tale that probably best achieves this is Homeland which uses the haunted house trope to good effect.
The stand out stories for me were Kindred Spirits and The Suicide Room for the concepts behind them and Wind Chimes which is a nicely atmospheric tale with a twist. A DVD of the short film made form this story is also included.
Dickens provides the starting point for two of the stories in the collection. Humbuggered is an updated version of A Christmas Carol which didn't quite work for me, whereas Signals was my favourite story in the book. The story it references is The Signalman - which just happens to be my favourite Dickens ghost story. (And which is definitely the best of the BBC's adaptations). I was a little apprehensive starting Signals - a high risk of sacrilege and all that - but actually really enjoyed this clever sequel to the original.
Ghosts is the first in Spectral's Collections series and provides a strong start to what will hopefully be a long line to come.