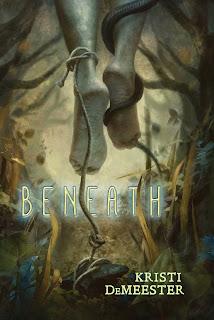 Beneath is the debut novel from Kristi DeMeester and is published by Word Horde. Set in the 1980s, its protagonist is Cora, a journalist sent to rural Appalachia to research a story about an evangelical preacher who incorporates snake handling into his services.
What follows truly is a journey into the heart of darkness, in which buried secrets are unearthed – among them Cora’s own, a back-story revealed which adds context and nuance to the horrors she uncovers.
Beneath is not an easy read. Cora’s investigations take her to some very dark places, and there are scenes which are difficult to read – not because of the writing, which is immaculate throughout - but because of their subject matter. I’ve often expounded the theory that the mark of an effective horror story is that it unsettles and disturbs and that's very much the case with this novel. There’s nothing gratuitous or exploitative here though, the prose is calm, assured and understated – which makes the horrors being described all the more profound.
There are human monsters here for sure, but there’s also a supernatural element to the horror. The author has created a mythology in which to embed her story which works brilliantly, the dark forces she conjures providing a wonderful device with which to address the many issues the book raises. These supernatural elements are introduced gradually and very cleverly. Dreams and reality merge, wrong-footing and disorientating the reader before taking prominence in the book’s closing chapters. Confining the story to its remote location works extremely well here, with neither the protagonists nor readers exactly sure of what is happening and to how many.
Multiple themes run through the narrative, twisting around each other like snakes in a pit. There is much metaphor and allegory here (even the choice of Cora as a name has a significance) with the aforementioned serpents providing much of the real and suggested horror. A combination of snakes and religion usually leads to temptation and this is one of the stronger motifs on display here – a weakness in some, a weapon to others.


Beneath is a marvelous debut novel. Unafraid to tackle difficult issues, it provides a bleak and compelling examination of human nature whilst at the same time creating a believable, and terrifying mythology. It’s another fine addition to the steadily growing ranks of literary horror and a book I thoroughly recommend.
Posted by Anthony Watson at 09:32 No comments: