Skewered and other London Cruelties. 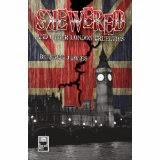 I first encountered Ben Jones on a now defunct horror writers forum. As is the case with many forums, despite the membership being in triple figures, there were only a few members who actually spent any time posting stuff up there. I was one and Ben was another and through the board we developed a virtual friendship as we both seemed to be singing from the same hymn-sheet as far as most of the discussions were concerned. That friendship moved from virtual to real when work would occasionally take me down to London – Ben’s home town - where we finally met up in person and spent many an evening talking about our shared enthusiasm for writing (and reading) as well as generally putting the world to rights. Alcohol may have been involved at some point.

The forum had a board where stories could be posted up for comment so I’d read a lot of Ben’s work before I’d met him and had been impressed by what I’d seen. It was clear he was destined for success and over the years he’s achieved that with publications in the small presses. It was only a matter of time before a collection was released and now that’s happened with Skewered and other London Cruelties from Crime Wave Press.
To celebrate the release of the collection, I thought I’d abuse the relationship we have by asking Ben a few questions about it and his thoughts on writing in general:

AW: The collection opens with Skewered , a novella which has plenty twists and turns. Did you have the ending sorted before you started writing and then work backwards from it or did the story develop as you were writing it?


BJ: Well, I had some of it sorted. In the early drafts a large portion of the end of “Skewered” was actually at the start as Charlie Bars explains how he’s ended up in a certain situation. I had a general idea of where I wanted the story to go but nothing was set in stone. That’s probably how I write a lot of the time; I’ll have a blurry idea for an ending and hope it becomes clearer as I work towards it.

AW: Real Estate also features your character Charlie Bars – and I know you have plans to feature him again. Did you ever consider writing a crime story from the perspective of the police?


BJ: I’ve written things from a police perspective before, but none of them have seen print. Although they’re usually not your ‘straight arrow’ type of copper. On the whole though I prefer to try and write from a different angle. I’m a big fan of certain crime novels that come from the view of the police; Chester Himes’ “Harlem Cycle”, Ken Bruen’s “R n B” novels but I feel that it is too easy to fall into clichés which we see time and time again. I don’t think I’d rule out writing from any perspective but I think if I was to be from the police angle then I would have to be struck by something that I considered ‘different’. Although, that said, I am about to re-draft a horror piece about a group of corrupt London police officers being pursued by creatures summoned by West African witchcraft – does that count?

AW: I think it probably does, it could even be the start of a new sub-genre. You once pointed out to me the spot where a taxi driver had been beheaded… How important is location to you – do you regard London as a character in your stories?

BJ: I remember, suicide by beheading – not sure that’s the best way to go! Odd little macabre stories seem to crop up all over the city, and in other towns, cities and places I am sure. Sense of place and location is massively important to me. I’d like to think I manage to catch the city as a character but I’m not sure I always do. For me London is an ancient, living entity that has its own habits, strange rites and most importantly stories to tell. So many of my stories have been given to me by the city, in things I’ve heard, seen and read that it would be rude not to try and pay homage in some fashion. I really that capturing the city’s character is something I will be able to do more in the future.

AW: I know you’re a big fan of historical settings for your stories and I’m guessing that’s part of the appeal of writing your westerns. Do you enjoy the research that’s required to make them authentic?


BJ: Even when I was younger it irked me watching a western set during the American Civil War and everyone was carrying 1873 Colt Peacemakers or other firearms from two decades after the Civil War was over! So in terms of that I do try and make sure things are ‘correct’. A lot of the research books I read are things I read for pleasure anyway so I like to think it’s all just knowledge and enjoyment and if it gets used in a story then so be it but if it doesn’t then I’ll have enjoyed learning it. The other thing with reading, what some might term, ‘research’ books are the amount of story germs and ideas that you stumble across.

AW: Hungry is the Dark has supernatural overtones to it and I know you also write horror fiction. What’s your take on the current state of the horror genre?


BJ: It seems people have been saying this for years but I believe it’s going through a real revival. Horror novels are once again pushing into the mainstream with people like Adam Nevill and Alison Littlewood’s books being easily available and in the public eye. The quality and variance of styles across the genre is also at a peak. Plus with new small presses like Crystal Lake Publishing really pushing forward it seems like a great time to be a horror fan.

AW: You also write westerns. Do you go through phases, moving between genres, or is it a case finding the best vehicle for a particular story?


BJ: Normally the genre and story come to me at the same time or I’ll start thinking about wanting to write, say, a western today. But I do seem to run in phases knocking out a couple of stories in each genre at a time. With the fact that I do mix genres in can get a bit blurred… for example most of my westerns do have elements of horror in them so it isn’t a massive leap to move to a straight horror piece and then because a lot of my non-western fiction is London based stepping from a ghost tale into a dark crime story isn’t, again, a huge jump.

AW: What’s your writing process? Do you just spill all the words out onto the page and then edit and refine or do you edit as you go?


BJ: Well I think it has changed over the years. These days I like to draw up a little plan and then plough through a first draft, sometimes long hand but mainly straight onto computer now. Then I’ll print it, have a read adding edits by hand and then redraft. After that it will either get drafted again or I’ll send it to a few people to read over and see what they think. Now and then, of course, I’ll deviate from this process perhaps because an idea strikes me and I want to see where it will take me or I’m trying to go with a ‘train of thought’ style piece.

AW: Have you any plans to write a novel? I think the shorter formats work best with horror but could definitely see the potential for a Charlie Bars – or even a Tomahawk Val western – novel from your good self…


BJ: I agree in terms of horror – a truly terrifying horror novel is a rare beast indeed. I am working on something longer in the horror genre but that is more a collection of shorts dealing with overarching themes and ideas. There is a Charlie Bars novel in the embryonic stage at present – I’m hoping to really get going on it in the next few months. I’ve just finished a horror western novella which I enjoyed writing immensely and have an idea for a ‘straight’ western that might be a novella or might be something a little bit bigger… Tomahawk Val is rather strange as he’s a character that came into being in a story that hasn’t even been picked up yet! So I have two long shorts, another half-finished and a shorter piece about him. The idea is that once more of this stuff has been published and I’ve written a lot more I’d like to try and put together ‘The Ballad of Tomahawk Val’, but as always we’ll see what happens.

My thanks to Ben for taking the time to answer all my questions.

Skewered and other London Cruelties is a brilliant collection of hard-hitting crime stories with a lovingly created sense of noir and the odd supernatural flourish. It’s a great showcase for a talented writer who is destined for bigger things to come. You can, and should, buy it here. 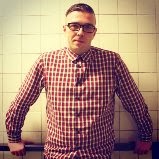